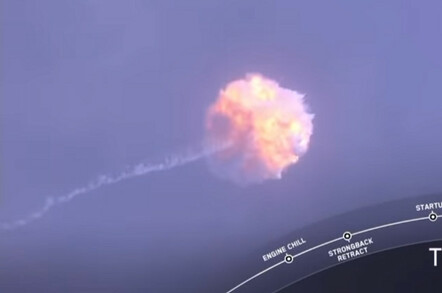 SpaceX looks set to shove a pair of astronauts into its Crew Dragon capsule following a successful demonstration of abort systems over the weekend.

After a postponement due to weather, the sacrificial Falcon 9 finally left the Kennedy Space Center's Launch Complex 39A at 15:30 UTC on Sunday 19 January. Approximately a minute and a half into the flight the engines of the booster were shut down as planned to trigger the abort.

The SuperDraco rockets of the Crew Dragon capsule then fired to whisk the spacecraft away from the booster before aerodynamic forces did for the Falcon 9.

It was the fourth and final flight for that particular booster. Recovery wasn't planned, and the impressive fireball showed SpaceX's prediction that the rocket wouldn't survive were pretty much on the money.

The Crew Dragon itself hit a velocity of Mach 2.2 and an altitude of 40km during its adventure as it shed its "trunk" before orientating itself for a return to Earth.

Drogues followed by four main parachutes were spat out by the spacecraft on the way down.

The capsule made a safe rendezvous with the ocean at 15:38 UTC.

SpaceX boss Elon Musk described the test as "picture perfect" in a post-mission briefing, observing that things had gone as well as one could expect. He added that he expected the hardware required to launch humans to the International Space Station (ISS) would be ready by February, "but no later than March", and the first crewed mission would take place in the second quarter.

On hand to offer congratulations was NASA administrator Jim Bridenstine.

Congratulations to the @NASA and @SpaceX team for a successful In-Flight Abort Test! This critical test puts us on the cusp of once again launching American astronauts on American rockets from American soil. Spacecraft recovery operations are underway. pic.twitter.com/5ZzEVesAJW

Had the SpaceX test done a Boeing and not gone entirely to plan, the agency would have found itself in somewhat of a bind.

Since the US shoved its Shuttles into museums, only Russia's Roscosmos has the ability to take 'nauts to the ISS. The price for seats aboard the venerable Soyuz has continued to rise over the years and NASA is reaching the end of the current batch of posterior perches.

SpaceX and Boeing are both building capsules for NASA's Commercial Crew programme, and both are years behind the original schedule. SpaceX has already sent a Crew Dragon to the ISS, but suffered a setback when the same vehicle came to an unexpectedly explosive end during testing. Boeing has yet to make it to the station after a timing error resulted in an early return to the Earth for its CST-100 Starliner.

Boeing and NASA have opted not to put the Starliner through a SpaceX-style abort demonstration. Handy, because the beleaguered aviation giant's rockets are very much a single-use affair.

Boffins will now pore over the data generated by the weekend's demonstration, and further testing (not least of the mk 3 parachute system) is planned.

However, one NASA astronaut professed himself very chuffed with how things had gone.

Having survived a wild ride in one of Roscosmos's finest, Hague should know. ®