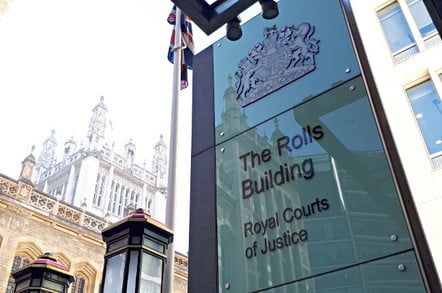 Autonomy Trial Key witnesses in the Autonomy Trial testified against Mike Lynch and Sushovan Hussain to save their own skins from US prosecutors, Hussain's barrister told London's High Court.

Summing up the case for his client, Paul Casey told trial judge Mr Justice Hildyard yesterday that former Autonomy head of US sales Christopher "Stouffer" Egan only gave evidence supporting HPE because both were subject to deferred prosecution agreements with the American Department of Justice.

In 2011, HP bought Autonomy, a maker of software to keep track of unstructured data, founded by Mike Lynch in the UK – for $11bn.

"There is," said Casey, "a different category of witness who was clearly giving evidence under some pressure from the DoJ, obviously that means Mr Egan. But also the Truitts, also, and various others had various forms of immunity."

Dave Truitt, currently of Discover Technologies, gave evidence in the US criminal trial of Sushovan Hussain, which was referenced by Casey and by Egan earlier in the UK trial. His brother Steve also gave evidence.

Egan, for his part, gave oral evidence which appeared to contradict his written witness statement, which he seemed to admit had been prepared in part by American lawyers.

Continuing, Casey said that Egan's deferred prosecution agreement with the DoJ had a statement of facts which the man could not depart from while giving evidence. Mr Justice Hildyard asked: "He couldn't depart from that material under pain of what?"

Potentially, said Casey, "tear up the agreement". The inference he wanted the judge to draw was that Egan had been leaned on by US prosecutors to only give evidence that supported the case against Lynch and Hussain – on pain of being flung in prison if he dared depart from the agreed line.

Casey also asked the judge not to hold Hussain's failure to give live testimony against him. In English law, a witness who makes a written statement but who doesn't submit to cross-examination in person can have his evidence marked down and given less weight.

Hussain's reason for not testifying is that he doesn't want to give away anything American prosecutors could use against him while he appeals against his criminal conviction in the States. Casey said: "There is no suggestion from the other side that Mr Hussain has given a false reason for not giving evidence. The reason Mr Hussain has given is a genuine reason and not a falsehood."

In a May 2019 letter shown to the judge, Hussain's lawyers said that appealing his 51-month prison sentence "must take priority over all other considerations" and that he would be preserving "to the fullest extent possible his right to remain silent."

Mr Justice Hildyard asked Casey "whether I should draw any inferences from the fact he's not going the whole hog, if I can put it like that."

Casey replied: "Essentially that is all I've got to rely on from Mr Hussain in support of my submissions."

Pointedly, the judge observed later on: "We take a rather different view over here… we rather regard any resort to the privilege against self-incrimination as a black mark."

Casey also mentioned that US prosecutors had, after first using HPE as a willing proxy to obtain copies of all documents disclosed by Lynch and Hussain to the High Court, eventually realised that some interview transcripts from UK investigations might count as "compelled evidence" under US law, making them inadmissible in criminal cases against the two. At least some of the disclosed documents have already been handed to the US FBI and the US Attorney for the Northern District of California.

"A large number of [HPE]'s witnesses were also witnesses for the US Department of Justice prosecutors at the US trial," said Casey in his written closing argument. "As a result, many of them – including [HPE]'s key witnesses against Mr Hussain – have been at least doubly over-lawyered."

Hussain's barrister was saying that after so many meetings with lawyers to check and double check their witness statements and what they were likely to say under oath, the witnesses were more likely to "remember" things they were told to say rather than what actually happened – making them less reliable.

Addressing the dodgy accounting claims, the written closing asserted that Autonomy auditors Deloitte "knew precisely how much hardware was sold per quarter" as well as "the impact of the hardware sales on Autonomy's revenues and margins." Hussain's part in "inventing" misleading accounting strategies is said to be both entirely legitimate and "wildly overblown."

The case is now scheduled to end tomorrow, though at its current rate of creep it is potentially possible that the final day of oral arguments will be next week. The Register will be reporting the written evidence and cross-examinations of the two expert accounting witnesses over the coming weeks, as well as a readable summary of the trial. ®