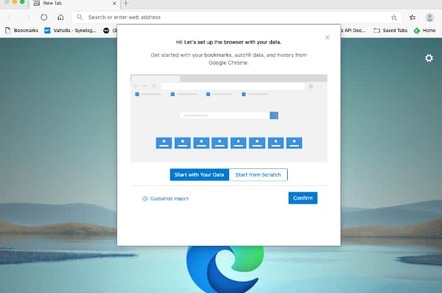 Hang on, what happened to old-fashioned English?

Of these ostensible benefits, Edge's privacy controls should have the most immediate impact. As Joe Belfiore, corporate VP of Windows, notes in a blog post, Edge "comes with our Privacy Promise and we can’t wait for you to try new features like tracking prevention, which is on by default, and provides three levels of control while you browse."

It also comes with a language randomization feature – several people have reported seeing a language other than the expected English upon installation. But evidently this is unintentional.

This may not matter two years hence: Google on Tuesday said it plans to phase out support for third-party cookies in 2022. By the time that happens, the search ads biz hopes to have built alternative tracking mechanisms into its Chrome browser. It's not yet clear whether those will be blockable.

But for now, Edge's cookie fast represents a positive step for privacy. The reborn browser also includes a private browsing mode called InPrivate, and malicious website protection, in the form of Microsoft Defender SmartScreen. But those are table stakes for browsers these days.

Edge's tracking prevention offers three levels: Basic, Balanced, and Strict. The default and recommended setting, Balanced, blocks trackers from sites you haven't visited, which results in less ad personalization while striving for compatibility with most websites. Strict goes further, blocking the majority of trackers from all sites, with the caveat that functionality on some websites may break. The Basic setting lets most trackers operate, for those who want behavior-based ads.

And because Edge is built on Chromium, users can install various Chrome Web Store extensions for additional privacy protection, in addition to Edge Addons.

Much of what distinguishes Edge is best judged in relation to the differences between the browser and its past self, the legacy version of Edge that's based on the EdgeHTML and Chakra engines.

Eric Lawrence, principal program manager on Microsoft's web platform, detailed many of these changes in a blog post last year. Mostly, these are under-the-hood changes that affect security, like enabling TLS/1.3 by default and blocking navigation to file:// URLs from non-file URLs, or similarly meaningful but non-obvious plumbing changes.

Microsoft's work on Edge is also having an impact on web standards through various initiatives to improve accessibility and other aspects of the web experience.

Edge's conversion to Chromium is just the beginning. Promising features like Collections, a form of data-rich bookmarking, should soon emerge from beta testing.

Microsoft may love Linux these days, but it isn't yet shipping a Linux build. Edge is currently available for macOS, Windows (7, 8, 8.1, 10), iOS and Android. Windows consumer users can expect to get the latest Edge via Windows Update, eventually.

If you're not on Edge already, you could be. ®