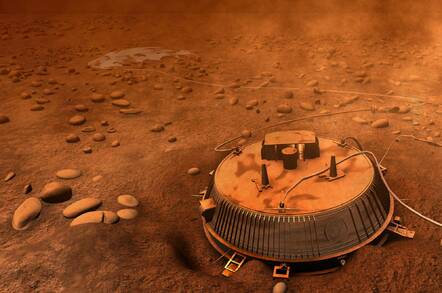 The European Space Agency’s Huygens probe, the farthest lander to ever make it in the outer solar system, spun wildly in the opposite direction as expected as it descended onto one of Saturn’s moons. Now, scientists have finally figured out what went wrong, 15 years after the probe’s landing.

The circular device, shaped like a hamburger, measured 2.7 meters across and was launched aboard its mothership Cassini in October 1997. After a seven-year trek across the solar system, Huygens was released and directed onto Saturn’s moon Titan while maintaining a slow spin for stability.

The landing process was smooth at first, but problems soon appeared as Huygens began its final leg of the journey. With the parachute deployed, the lander began to descend onto the surface of Titan but its spin rate plummeted, then it suddenly started spinning in the completely wrong direction.

Luckily, the altercation didn’t throw the probe completely off course and it managed to touchdown on Titan before its batteries fizzled out 90 minutes later. Scientists were left puzzled as to how the probe, which spun anti-clockwise at a rate of 7.5 rotations per minute, suddenly flipped its direction of spin.

Now, a group of scientists have solved the mystery. The spin is controlled by 36 angled vanes, a set of blades that propel the probe’s rotation through Titan’s atmosphere.

These vanes started whirling in the wrong direction, as two other instruments the Separation Subsystem and the Radar Altimeter antenna on board generated a "negative torque" of its own in the clockwise direction. Next the vanes amplified the effect as the blades whipped the flow of gas around the spacecraft, causing it to flip its direction of spin.

Although it continued to whiz in anticlockwise motion for over two hours and fifteen minutes until it reached the moon, and it remained fairly steady as the magnitude didn’t change by much, according to the European Space Agency.

The investigation conducted by students and interns at the Polytech Orléans and the French research laboratories LPC2E and PRISME by sending a simulation of the Huygens probe through a windtunnel.

Nevertheless it successfully landed and sent back some stunning images of the moon of Titan and the sounds of landing, and set the marker for mankind's furthest landing yet. ®