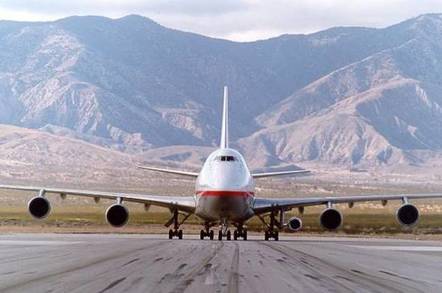 The US company has also lost its title as the world's largest planemaker after net orders (after cancellations) last year came to just 54 aircraft. The BBC reported that in 2018 Boeing delivered 893 aeroplanes.

Deliveries of new aircraft to customers halved to 380, reportedly the lowest number since 2008.

The Seattle Times, Boeing's hometown newspaper in the US and one of the leading sources of information about the company, reported that the airframer suffered net cancellations of more than 200 737 Max aircraft during 2019, a loss of $10.6bn in order revenues. In stark contrast, Airbus scooped 662 orders for its A320neo series aircraft.

One of those deliveries was a P-8 Poseidon submarine-hunting aircraft for the Royal Air Force. The P-8 is a militarised 737-700, part of the older 737 Next Generation design family and not the Max.

It's a Boeing so nobody's going

Boeing's woes were caused by its desperation to compete with majority-French rival Airbus and its A320 series of airliners. With Airbus merrily eating up market share thanks to the newest models of A321 including more fuel-efficient engines and a much greater range than previous models, Boeing charged ahead with its 737 Max.

Key to making the Max competitive with the A321neo were bigger engines. But these changed the 737's flying characteristics, so Boeing implemented a software system called MCAS. MCAS was intended to automatically kick in and help prevent a dangerous stall developing.

Yet pilots were not told about MCAS's inclusion on the new aircraft, in part because Boeing wanted to minimise the amount of costly conversion training for pilots flying the Max. When MCAS kicked in, inputting nose-down trim in bursts that pilots weren't expecting, hadn't trained for and didn't fully understand how to override, two fatal crashes killing 346 people were the result.

All of this stems from Boeing's decision to rush in a software function to compensate for physical hardware changes – and then to poorly document that to the point where end users didn't know what was going on when things went wrong.

The airframer has acquired a new CEO, David Calhoun, after previous chief Dennis Muilenburg was defenestrated over the Max fallout.

A raft of internal Boeing communications was released to the public earlier this week revealing just how much contempt and anguish was going around inside Boeing at the time the 737 Max was being finalised.

In among those messages, seen by The Register, are multiple specific references to a 737 Max simulator installed at London Gatwick Airport. Boeing staffers appeared concerned that the sim wasn't going to meet its Level D certification (the highest level, necessary for the most demanding pilot training) because it wasn’t realistic enough.

They also appeared worried that the sim might have been faithfully reproducing unusual control displays as would have been shown in the real airliner, potentially calling into question other aspects of the 737 Max software. ®