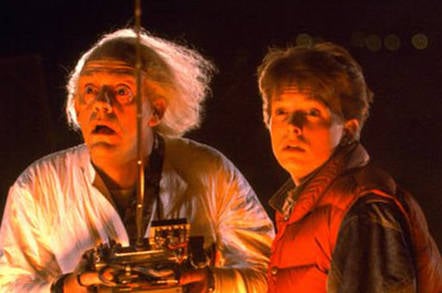 You built a Y2K20 compliant time machine out of a... DeLorean?

A mysterious "blip" has caused the printers of the UK Driver and Vehicle Licensing Agency (DVLA) to skip back a century as 2020 rolled round, unless the acknowledgement of a change of keeper took a really long time to arrive.

A Register reader, having sold a vehicle, filled out the requisite paperwork and sent it off to the agency, which is responsible for maintaining a database of drivers and vehicles in Blighty. An acknowledgement was received, which helpfully noted that it been printed in 1920.

More impressive is that the acknowledgement was apparently printed some 45 years before the DVLA was actually formed.

Sadly, we doubt Doc Brown was involved in this one. A spokesperson for the agency told us that "it looked like a blip when printing the date on the letter", although we're mindful of the quick and dirty solution to the Y2K problem a large number of engineers opted for back in the day.

Rather than rewriting code to handle a four-digit year, many opted for a windowing approach, where systems would treat the 20 years from 00 to 19 as being from the 2000s.

Let those who have never wrapped the sticking plaster of a quick hack around a thorny problem cast the first stone. And after all, the fix bought another two decades of time – surely beancounters would have stumped up the cost of a proper fix, or systems simply been replaced, by then?

Alas, it appears not. New York parking meters stopped accepting card payments as the year turned, and some Electronic Logging Devices (ELD) sold by Trimble (formerly PeopleNet) threw a wobbly as 2020 arrived and a disconnect between GPS and server clocks left gear in a continuous reboot cycle.

In the case of the latter, it meant some US truck drivers were forced to switch to paper-based methods for logging until borked units could be dealt with.

It's a bit embarrassing for an industry rightly proud of how little went wrong 20 years ago. It is also small beer compared to what is coming down the pipe before the next two decades are out and the "Year 2038 Problem" hits.

Linux clockpocalypse in 2038 is looming and there's no 'serious plan'

Caused by a decision to start Unix time on 1 January 1970 at 00:00 UTC and store the counter as a signed 32-bit integer, the problem could see all manner of legacy devices falling over in the early hours of 19 January 2038 with a numeric overflow.

While modern applications and operating systems have been patched as the date looms, with 64-bit time used in the likes of Linux (on 64-bit architectures), work is ongoing in dealing with systems that will get uppity about compatibility. Embedded hardware (such as medical devices with lifetimes measured in decades) could well present a particularly thorny problem to resolve.

Still, with almost two decades left before the worst of the problems might show up, there remains plenty of time to fix things. Or to buy that remote cottage on a mountain and start growing your own peas. ®