Macro or Mackerel? Whatever it is, it looks o-fish-al. We'll get our sealskin coat 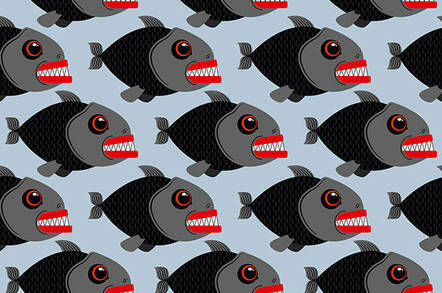 Who, Me? Welcome to Who, Me? The Register's headlong plunge into the pit of reader recollections and confessions.

Today's story takes us back to the glory days of the early 1990s when our hero (at least until he made a nuisance of himself) "Cliff" was coming to the end of his schooling.

The 8-bit generation had very much passed into history at this point, with ZX Spectrums and Commodore 64s shuffling to the attic while the kids with long paper rounds or deep-pocketed parents enjoyed the delights of Atari's ST and Commodore's Amiga.

While PCs had yet to slink their way into the nation's homes, the beige boxes were starting to make their presence felt in education.

Indeed, this hack remembers university days when the back of the computer room was suddenly filled with Windows boxen that were, to be fair, used mainly for playing Solitaire rather than the serious business of Pascal on the VAX terminals.

Cliff was one of the geeky kids who hung around the art department of the school where, inexplicably, many of the new computers had been installed. He spent his time indulging in the playground arguments of Amiga versus Atari and bashing the Blitter for the former's burgeoning demo scene.

Heck, the school even had an Acorn Archimedes lurking in the corner.

Cliff, already under a cloud for exploding science projects and sneaking in an imported Gameboy in order to get through the tedium of French lessons, also took an interest in the batch of Windows 3.0 PCs that had turned up, along with Microsoft Word (readers may gawp at the latter following Microsoft's 2014 emission of source code.)

Ever curious, Cliff started poking around with what would become Microsoft's productivity cash cow and soon discovered the joy of the QuickBASIC-derived WordBASIC. Despite a relatively limited (by today's standards) command set, it could be made to do all manner of things. Heck, it was possible to fiddle with menus and make things load automatically and silently.

Enthralled with his newfound powers, Cliff did the obvious thing and created a macro that would would find and replace "the" in documents and replace it with "tuna" on saving. The reverse would happen on loading, so that the document always looked ok on screen, even if what was on disk was less so.

He added this japery to all the lab's PCs, reckoning that students taking documents home to work on would enjoy some momentary confusion at his fishy antics, but no real harm would be done.

However, he hadn't factored in a new requirement for some subjects that coursework would have to be submitted as files saved to disk (presumably why the school acquired those PCs) and that the requirement would come in shortly after his "improvements" had been made.

"One of the BTEC classes used the lab to finalise the coursework for their latest module. Hey presto - everything was submitted to the exam board in 'tuna mode'."

A stern dressing down later, and Cliff was asked to return the lab equipment to its original, non-oceanic state.

Readers will be unsurprised to learn that he was later invited "to stop attending" the school following further, er, indiscretions. but you will be relieved to learn that while Cliff went on to forge a career in non-seafood-based software, from backup applications to video games, he steered clear of Word Processors for much of the last three decades.

Ever slapped Microsoft Word with a wet fish? Or used your macro powers for evil instead of good? Of course you have, and a confession to Who, Me? will ease the burden of your conscience. ®