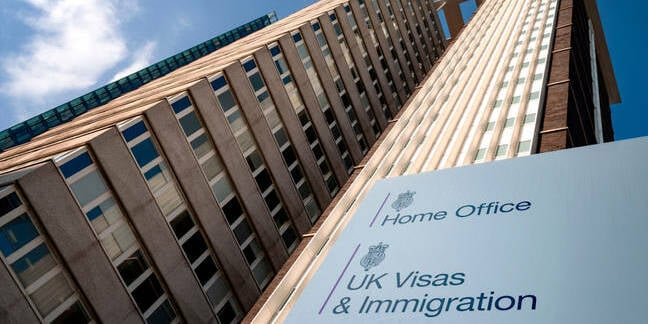 The Dark Towers: The office blocks in Croydon that house the headquarters of UK Visas and Immigration

Updated The UK's Home Office has tossed a contract worth up to £100m of taxpayer cash at Amazon Web Services to renew a public cloud hosting agreement with the hyper tax efficient American giant for four years.

The contract was published on Contracts Finder this week but the start date was actually on 12 December and it runs until 11 December 2023.

“The award of the Public Cloud Hosting Services contract to Amazon is a continuation of services already provided to the Home Office," a spokesperson at the department told The Register.

"The contract award provides significant savings for the department over a year-year term," she added.

There is of course, no guarantee that the Home Office will spend £100m with AWS over the period, but it can spend up to that amount.

And so continues the march of Amazon in the UK public sector, helped by the cloud-first strategy that was put in place by former UK government technology advisor Liam Maxwell, who is now director of government transformation at AWS, as exclusively revealed by us.

According to official stats, AWS has scooped up more than £123.41m worth of public sector cloud spending in fiscal '20 that ends 31 March, via the G-Cloud marketplace. Other departments and agencies using AWS include the Ministry of Justice, the DVLA, HMRC, the Department of Pension, and the NHS. Police IT has also been migrated from on-prem servers to AWS.

TechMarketView last year estimated AWS has turned over £850m in the UK, so it appears that the appointment of former HPE EMEA overlord Andy Isherwood, who took the same role at the public cloud giant in 2017 to bolster corporate business, is taking effect.

AWS serves UK clients from racks it rents from a local data centre provider, an agreement first formed at the tail-end of 2016, as The Reg exclusively revealed. The latest agreement will not go down well with SMEs that the government always professes to give equal billing to in procurement.

The cloudy arm of online retailer Amazon has been at the centre of some controversy in Britain after it emerged that HMRC spent six times as much with AWS - £11m - in 2018 than it received in corporation tax from the company.

AWS has sent us a statement.

"Government departments using AWS are not only enjoying cost saving of up to 60 per cent but also supporting a vast ecosystem of smaller companies, across the UK, that offer products and services that complement and help customers take full advantage of AWS."

It added: "Public sector organisations in the UK use the UK branch of AWS Europe which registers its sales in the UK and pays all applicable taxes, due on its profits, directly to HMRC. Amazon recognises that its status as a supplier to the public sector is a privilege which has to continually be re-earned through the quality of our services and the value for money that we bring for UK taxpayers. We know they will only remain customers for as long as we are able to deliver on both of those things.” ®