Sorry, I've misplaced my ticket again. Where's my head at? 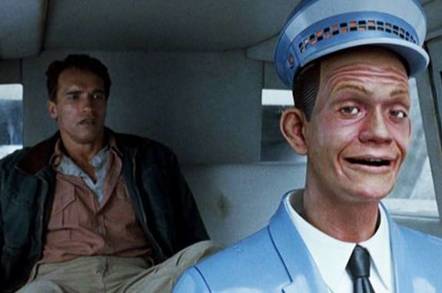 Something for the Weekend, Sir? There is supposed to be an old Afghan proverb that goes: "When God wants to punish a nation, he makes them invade Afghanistan."

A lesser-known variant of this epigram states: "When God wants to punish a business in the transport industry, he makes them unveil a flying taxi." And thus it came to pass at CES this week that the Lord of Hosts' wrath was directed at Uber.

Not content with trying to turn urban streets into a kind of Wild West with tarmac and smartphones, Uber says it now wants to launch an airborne passenger service with sexy-looking, Hyundai electric aeroplanes that don't exist. It's as if the company was so upset by its failure to secure a licence for operating on London roads that it decided, in a huff, it would float above them instead.

Just imagine the skies being darkened by hundreds of empty Uber planes aimlessly buzzing around in the hope of picking up a booking. Well, you'll have to keep imagining because it'll never come about.

You see, it's a drearily repetitive fact of commercial inevitability that every few months, someone, somewhere, will announce to the press with a great deal of fanfare their plans to launch a hi-tech, flying taxi… and they will never be heard from again. Spooky, eh? That's the influence of the Holy Ghost.

By the way, a similar proverb posits: "When God wants to punish a musician for being too successful, he makes them do the theme song for the next Bond film." But that's another story – and a career trajectory infographic I'd very much like to see.

Returning to our fantasy world in which flying taxis could exist – heck, let's go for it, why not handheld ray guns and the cat-toast perpetual engine too? – I wonder whether this kind of air traffic would demand a more elaborate passenger validation system than ground-level minicabs.

Assuming that Uber would be a little more insistent in the air than on the ground that its pilots really are qualified (as opposed to, say, flying their cousin's Hyundai), would passengers also have to submit to extended checks? Or can passengers continue to do what they do now – that is, jump in the back and wait for two minutes while muttering "come on, let's go" as the driver fiddles with the booking app and keeps poking the wrong buttons in Google Maps?

I'm aware that limited flying taxi services already exist in major cities: private-hire helicopters. Passengers don't submit to airport-like security procedures but the bookings can't really be taken on the, er, fly like an Uber. Route plans and timings have to be pre-approved and adhered to. You can't really launch an app, punch in your location as 34 High Street (roof) and check the prices and availability of currently airborne helicopters nearest to your location for an immediate pickup.

Maybe you can, what do I know? But when it comes to electric planes, it seems plausible that city security authorities might be slightly more concerned about lots of vaguely licensed, trust-based passenger transport vehicles being deliberately dropped on their heads or being crashed into tall buildings than those being inched along congested roads at 2mph. Flying taxi pilots and their agents, therefore, might be required to run passengers through a more extensive ID trace than just validating their credit cards for payment.

Perhaps a quick photo ID check will be enough. Hmm, I really must get around to ordering a Freak Mask from Firebox. That way, I can go out on the lash, take a flying taxi home and throw up all over the seats, safe in the knowledge that both the biometrics and the onboard CCTV confirm that Jacob Rees-Mogg was to blame.

No, a quick flash of your booking reference will not be enough. And so our atompunk vision of a city of flying cars takes another dystopian step away from The Jetsons and one closer to Viz Comics' The Bottom Inspectors. Before your flying ace can take you on your five-minute trip downtown, you will have to show a boarding pass, photo ID, letters of authenticity from your great-grandparents, and legal dispensations from the High Court, MI5, two Popes and NASA.

And being a disruptive technology, all this must be juggled simultaneously, online and in real time, on a smartphone.

This means the joyful experience of undergoing background ID checks will be boosted by the thrills of trying to get adequate 4G signal on 6 per cent battery. You had plenty of battery life when you started the process, of course, but the app keeps downloading updates, rebuilding massive booking confirmation PDFs, bullying you to re-enable energy-intensive things such as Bluetooth and NFC, and auto-brightening the screen enough to burn out your retinas, all the while also secretly sucking up personal data from your contacts, caller history and browser cache. It's all in the Ts & Cs that you tapped "Agree" to, remember?

The days when you could screenshot your travel ticket for offline use and show it to an inspector will be long gone. No connection? Then you're not stepping aboard, pal.

To be honest, you haven't really been able to do this for a while already, which is a shame. I used to find that for train bookings, a clean screenshot of a barcode or QR code in the confirmation email, zoomed in a little, was recognised more readily by the inspectors' handheld readers than the original booking app.

As usual, I digress. Whether it's technology, security or air traffic control practicality, for one reason or another, these flying taxi schemes never get off the ground, as it were. One wonders whether, mimicking techniques perfected by Ryanair, these fantasy announcements are never intended to be serious but simply to gain good publicity – either to boost investment or distract attention from bad publicity.

In other words, flying taxis are the equivalent of Ryanair's plans to fit outside toilets.

Apparently without appreciating the irony, Richard Branson has himself launched into a publicity drive, complete with animated video, to combat online scams and over-optimistic investment opportunities. This is the man who every year since the mid-2000s has been claiming Virgin Galactic will start running space tourist flights "next year".

That said, I very much appreciated cartoon Richard's (perhaps unintentional) reference to Bitcoin as an example of "get-rich-quick schemes" and "a sure-fire way to lose your investment". He should know: Virgin Galactic has been taking bookings in Bitcoin since 2013.

His final snippet of advice? "Don't ever give your personal details to anyone."

Unless it's the ticket inspector for the space taxi, of course.

Alistair Dabbs is a freelance technology tart, juggling tech journalism, training and digital publishing. He would like to give a shout out to wobbly computer games retailer GAME for its current offer of a £2 trade-in voucher for anyone who brings in a pair of unwanted Christmas gift socks. It's like Private Eye's "Desperate Business" cartoon come to life. @alidabbs