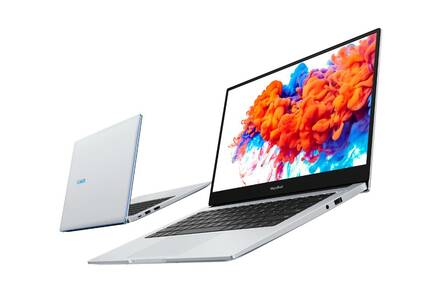 The latest generation MagicBook comes in two variants — a smaller 14-inch laptop, and a full-sized 15.6-inch workstation. Both machines are powered by AMD's previous-generation Ryzen platforms, with punters having a choice between the Ryzen 7 3700U and the Ryzen 5 3500U.

The Ryzen 7-powered machine packs the Radeon RX Vega 10, while the Ryzen 5-based machine has Radeon Vega 8 Graphics.

In terms of memory, users can choose between 8GB and 16GB of DDR4 RAM. Meanwhile, Honor is more generous with storage, offering 256GB and 512GB of fast PCIe flash storage.

Both versions of the MagicBook come with two USB A ports (both USB 3.0 and, weirdly, USB 2.0), as well as a USB-C slot which also doubles as the machine’s charging port. There’s also a full-sized HDMI port, allowing you to connect your machine to an external monitor without having to enter dongle hell.

On the subject of the display, both machines pack a standard 1080P FHD panel. Where they differ is the relatively tight bezels, which offer a solid screen-to-body ratio.

The 15.6-inch model has an 87 per cent screen-to-body ratio, while the 14-inch version is slightly smaller, with an 84 per cent ratio.

To accomplish this, Honor has stashed the webcam in a pop-up mechanism. This is almost identical to that found on the Huawei Matebook X and Matebook X Pro, which hides the webcam under a key buried within the function row.

The biggest problem with this is that it's… well… it’s not a particularly flattering angle.

With the camera pointing directly up at your face, the person on the other end of the Zoom call can count each of the Doritos-induced chins hanging off your face. It’s like the infamous MySpace angles, but in reverse.

Honor is best known for its phones, but in recent years, it has gradually entered other sectors, like fitness wearables and TVs. In 2018, it released its inaugural laptop effort, which was exclusively available for the Chinese market.

The latest-generation MagicBook is different, and is poised for a global release. That said, given Huawei’s woes in the US, we strongly doubt it’ll hit shelves on the other side of the Atlantic. Pricing is yet to be announced, but we’d be astonished if these machines start above £800. ®