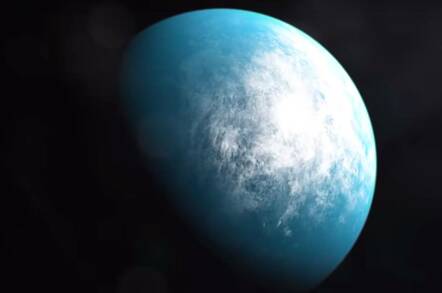 Vid NASA’s Transiting Exoplanet Survey Satellite (TESS) has stumbled across its first Earth-sized planet that lies within the habitable zone of a star.

That means that the otherworldly object known as TOI 700 d ticks two boxes. The first being that its size is similar to Earth, which suggests that it has a solid, rocky surface. And the second is that it orbits its star at a safe enough distance to prevent it being fried by solar radiation, but close enough that its temperatures are toasty enough to sustain liquid water on the surface.

TOI 700 d is the third outermost planet to orbit star TOI 700, located roughly 100 light years away. It completes an orbit every 37 days, and is about 20 per cent larger than Earth. The first innermost planet TOI 700 b is almost exactly the same size as Earth, but isn’t located in the habitable zone. The second middle planet TOI 700 c is 2.6 times larger than Earth, making it more likely to be gassy than rocky.

Initially astronomers had incorrectly approximated TOI 700's temperature, mistaking it for being hotter than it actually was. After the star was reclassified as a small, cool M dwarf star, this changed the estimations of the size of its planets.

“When we corrected the star’s parameters, the sizes of its planets dropped, and we realized the outermost one was about the size of Earth and in the habitable zone,” said Emily Gilbert, a graduate student at the University of Chicago, who presented the research at the 235th meeting of the American Astronomical Society in Hawaii this week.

“Additionally, in 11 months of data we saw no flares from the star, which improves the chances TOI 700 d is habitable and makes it easier to model its atmospheric and surface conditions.”

The chances that TOI 700 d might support alien life are purely speculative, however, as not much information is known beyond its size. It’s also tidally locked to its star, meaning that one side of the exoplanet is constantly bathed in sunlight, whilst the other side is in darkness.

Joseph Rodriguez Jr, an astronomer working at the Harvard–Smithsonian Center for Astrophysics, told The Register that researchers were currently trying to calculate the masses of the planets. “Once we can measure the mass of these planets, we can understand their bulk composition and determine whether or not these planets are rocky or not - specifically TOI 700 d, the habitable zone Earth-sized planet.”

It’s also unknown if TOI 700 d’s tidal locking might negatively impact the chances of its habitability. Still, the discovery is a rare gem. Only ten habitable zone Earth-sized planets have been found so far. The majority were spotted by NASA’s now defunct Kepler space telescope.

TESS was launched in April 2018 and hitched a ride to space on one of SpaceX’s Falcon 9 rockets.

Other than finding its first Earth-sized planet in its habitable zone, TESS also managed to scope out its first exoplanet that appears to orbit not one, but two stars. The circumbinary planet codenamed TOI 1338b – see vid below – is 6.9 times larger than Earth and lies 1,300 light years away from us in the Pictor constellation. ®