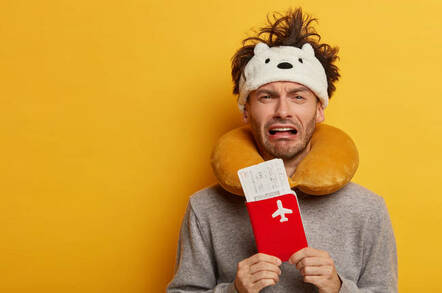 CES Annual trade shindig the Consumer Electronics Show (CES) is a big deal. For one insane week, nearly 200,000 nerds and industry hotshots flock to the neon-lit tundra of Las Vegas to gawk upon tech that might end up being picked apart for precious metals by a West African child labourer. And most of those passengers likely had an utterly miserable flight.

It seems that, as noted by travel writer Ben Schlappig on his One Mile At A Time blog, the various United Airlines flights departing from Newark to Las Vegas all have upgrade lists a mile long.

Mega American plane-flinger United Airlines automatically upgrades passengers to a higher class of travel based on their previous "loyalty" (money spent), subject to availability. Upgrades aren't guaranteed, and the airline publishes a list of eligible passengers in order of priority, so people can see how their odds stack up.

On the first flight departing to Las Vegas yesterday morning, operated by a Boeing 777-200 widebody jetliner most frequently seen on international routes, 183 economy passengers were in the queue for an upgrade.

The aircraft operated by United specially for CES is a high-density configuration of the Boeing 777-200, with 336 economy seats and just 28 business class thrones.

Those paying attention will have noticed that more than half of all passengers were on the upgrade list. Unfortunately, because business class was completely occupied, nobody received a complimentary reprieve from middle-seat monotony. Amazingly, it departed on time.

Schlappig also highlighted three other flights departing from Newark to Sin City that had significant upgrade lists. On one flight, operated by a Boeing 737-900, around 62 per cent of all economy passengers were eligible for an upgrade.

You can imagine the scene amongst those clutching black and platinum cards to their bosom.

CES's significance in the tech news calendar ripples into other sectors, with aviation and travel being a wonderful example. The popularity of the event has caused prices and demand to skyrocket, forcing airlines to adjust. United is flying larger planes between its hubs and Las Vegas, while Delta is adding extra capacity between Tokyo and Las Vegas in order to meet enthusiasm from the Asian countries.

But even this isn't enough to prevent a million-miler hotshot from ending up in a middle seat at the back of the plane.

CES 2019 And we're only halfway through the week