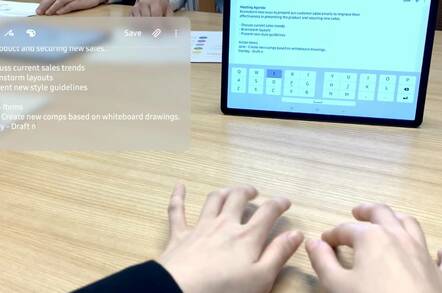 CES Despite roughly 15 years of innovation, virtual keyboards – like those found on a tablet or smartphone – are still truly hateful to write on, particularly when it comes to penning lengthy passages of text. Samsung's solution is something called SelfieType, which sees you type upon an invisible keyboard, with your phone's camera tracking your movements and turning it into text.

SelfieType is currently in the most nascent experimental stages, and there is no guarantee that it will eventually find its way into a commercial product. It is being demoed at the CES trade show in Las Vegas, and hails from Samsung’s C-Lab program, which is the in-house skunkworks for the South Korean tech giant.

If SelfieType sounds familiar, it's because the idea is strongly reminiscent of the old laser projector keyboards of yore. You know, the weird obelisk-type devices you plugged into your PDA, which blasted a virtual keyboard onto your kitchen table, which you'd awkwardly tap in a futile attempt to compose an email.

Broadly speaking, these sucked: They were neither comfortable nor accurate, and they forced the user to carry around a separate bulky device.

Although El Reg hasn't tried it ourselves, video demonstrations of the tech are encouraging - they should be - and show someone accurately writing text at a solid cadence.

SelfieType is being developed at a point when smartphone cameras are really good, and phones are powerful enough to run AI tasks, particularly when it comes to things like computer vision.

Neither of those things were true when laser projector keyboards first burst on the scene, during the days of Windows Mobile and Palm OS. And with that in mind, we'll cautiously reserve judgement until we get our hands on SelfieType. ®