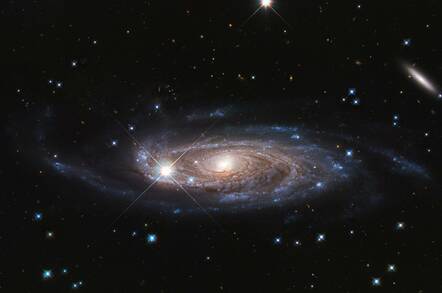 Astronomers have discovered the most-distant cluster of galaxies yet seen – and, separately, what could be the largest galaxy in the observable universe yet.

Meanwhile, British astronaut Helen Sharman has openly wondered if alien life not only exists but may be with us here on Earth "right now and we simply can’t see them." It's all go in the world of science.

Labeled collectively as EGS77, this most-distant-yet-seen cluster of galaxies existed when the universe was just 680 million years old, less than five per cent of its current age of 13.8 billion years. This trio of galaxies, a mere 13.1 billion light-years away from Earth, formed back during a time when the universe was just beginning to emerge from its so-called dark age.

After a brisk 380,000 years or so, the energy from the Big Bang cooled enough to form the first subatomic particles. Neutrons, electrons, and protons combined to create hydrogen atoms. These atoms glommed together in giant gas clouds and absorbed photons, making it difficult for ultraviolet light to travel throughout space and thus throwing the universe into this aforementioned dark age.

“The young universe was filled with hydrogen atoms, which so attenuate ultraviolet light that they block our view of early galaxies,” said James Rhoads, a researcher at NASA’s Goddard Space Center, who presented the discovery of EGS77 at the 235th meeting of the American Astronomical Society in Hawaii this week.

“EGS77 is the first galaxy group caught in the act of clearing out this cosmic fog,” he added.

The earliest stars glowed at various wavelengths of light, and some produced ultraviolet (UV) radiation known as Lyman alpha emissions. Hydrogen atoms absorb and re-emit Lyman alpha emissions, scattering the UV light in various directions. Over time the UV radiation ionised the hydrogen atoms, creating bubbles of ionised gas around galaxies, like those found in EGS77.

These bubbles allowed UV light to propagate throughout space, so that the researchers could finally see galaxy clusters like EGS77. “Intense light from galaxies can ionize the surrounding hydrogen gas, forming bubbles that allow starlight to travel freely,” said Vithal Tilvi, a researcher at Arizona State University, who led the study into EGS77, which has been submitted to The Astrophysical Journal.

“EGS77 has formed a large bubble that allows its light to travel to Earth without much attenuation. Eventually, bubbles like these grew around all galaxies and filled intergalactic space, reionizing the universe and clearing the way for light to travel across the cosmos.”

A video detailing the cluster can be found below:

The second galactic wonder is an image of what may be the largest galaxy in the observable universe, known as UGC 2885 or “Godzilla galaxy”. Measuring 463,000 light years across, this stonker is 2.5 times wider than our Milky Way and packs in ten times as many stars. It's located 232 million light years away in the Perseus constellation.

Despite its large size, UGC 2885 is surprisingly sleepy. The supermassive black hole at its center is dormant and doesn’t seem to be stealing gas from smaller neighboring galaxies. Instead, the giant spiral structure might be fed by a steady stream of incoming hydrogen gas from intergalactic space.

"How it got so big is something we don't quite know yet," said Benne Holwerda, an associate professor at the University of Louisville. "It's as big as you can make a disk galaxy without hitting anything else in space."

Astronomers aren’t quite sure if UGC 2885 grew by merging with neighboring galaxies or by accumulating copious amounts of gas to forge new stars. The latest snap of the behemoth galaxy was taken by NASA’s Hubble Space Telescope. Researchers hope to study its center with the upcoming Wide Field Infrared Survey Telescope (WFIRST) expected to launch sometime in the mid 2020s.

Speaking of astronomy... Betelgeuse, a star located in Orion's shoulder left of center, is strangely dimming, and is expected to collapse in a dramatic supernova explosion in the next 100,000 years, a safe 700 light years from our home world.

In other space-related news, the first British astronaut Helen Sharman believes, quite rightly, that somewhere nestled in all these galaxies is alien life.

In fact, aliens may be here with us right now, she says, and we just can't see them for some reason. Well, if there really is extraterrestrial life out there, it's possibly smart enough to avoid bothering contacting us Earthlings.

"Aliens exist, there’s no two ways about it," she told The Graun/Observer. "There are so many billions of stars out there in the universe that there must be all sorts of different forms of life. Will they be like you and me, made up of carbon and nitrogen? Maybe not. It’s possible they’re here right now and we simply can’t see them." ®