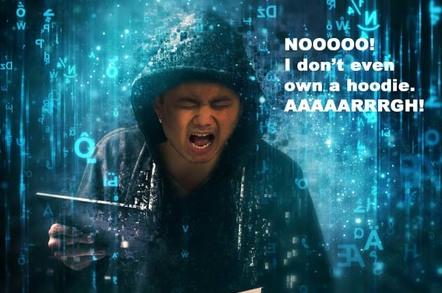 Who, Me? Welcome to another entry on the Who, Me? naughty list, filled with the confessions from techies who were perhaps a little silly, maybe somewhat devious, and yet still escaped with careers intact.

Today's tale takes us back nearly three decades, to the early 1990s, when Microsoft Windows was flirting with 32-bit extensions and Whitney Houston was blurting out "I will always love yoooo" at the top of the charts.

Our protagonist in the story, "Ben", was working, in his words, as "a lowly office bod". Offices were starting to get connected as networking became more commonplace and Ben saw an opportunity.

He volunteered to take on the role of System Administrator because, well, "no-one else seemed to want the job," and heck, "I knew which way up to push a floppy into a PC slot." Arguably more qualified than many a sysadmin we've come across over the years.

More importantly, and in a career trajectory familiar to many, "I saw this new position as my exit strategy from a life of drudgery (and boy, was I right)"

Naturally, his colleagues saw Ben's exciting new role for what it was, regarding him "as a jumped-up-Johnnie who really knew nothing about IT and treated me with the contempt I deserved."

"None-the-less," with the tenacity of the cockroach, "I persisted."

The office network ran on a product called PowerLan (the long-defunct networking software rather than the natty things to fling Ethernet over power cables) and, in an effort to make himself useful and achieve sysadmin boffinhood, Ben liked to poke around the innards of the LAN.

"I had a particular fascination for network printing and wanted to know how it 'really' worked" explained Ben, and he came across an interesting looking application called print.exe.

Hoping to gain his 1337 h4x0r badge (if this middle-aged hack understands the vernacular correctly), Ben opened up the executable in Windows notepad.exe "in a moment of pure newbie crassness", only to be presented with an impenetrable screen of meaningless hieroglyphics.

Hitting Save and Close, Ben initially thought his adventure was at an end. Suxxor! [Please stop. Ed]

An arse-whooshing sense of fear then made its presence felt as he began to worry that maybe, just maybe, he had made a terrible, terrible mistake.

"Sure enough, calls began to come through that printers around the building were not responding to print requests."

It was still morning, so the users were merely irritated. The proper rage would come in the afternoon when the big Oki printers in production were due to start churning out paperwork. Ben's company was in a time sensitive business so "some serious doo-doo would hit the fan."

It got worse: "The company president's secretary called and I was summoned to her office.

"As expected, she pointed at her PC and printer, "It's not printing" was the terse complaint."

Putting on a brave show of the competence that he had minutes ago learned he lacked, Ben fiddled with the print settings, tinkered with the cables, and pressed buttons before he "gravely advised that it must be to do with the network print system and that I needed to return to my desk to investigate further."

Naturally, Ben knew exactly what was wrong, but was not about to jeopardise his fledgling IT career with something as prosaic as the truth. "I probably had about 30 minutes to figure a solution before things got properly nasty."

Corrupting executables was not Ben's only skill. He was also up to speed on pcAnywhere and realised that, of course, the remote offices would also be running PowerLan. Necessity being the mother of invention, he "connected to them, copied and zipped up their print.exe, transferred it across, replacing the one I had corrupted." Sorted!

He had the company secretary restart her PC and, hey presto, "It's working, what did you do?"

Omitting one important fact from his explanation, Ben told the user "that the print executable had mysteriously been corrupted but I had fixed it."

Printers ground back into life all around the office with Ben praised for having saved the day and rescued the company from disaster.

"My reputation was gilded and my career in tech truly launched," Ben told us, before admitting that "the lesson being of course that it is not always necessary to be perfectly straight-forward with the users."

To which we'd add, "and don't go screwing with files you don't understand."

Ever created a catastrophe and been hailed a hero for fixing it? Or felt the bowel loosening sensation when an innocent tinkering went horribly, horribly wrong? Of course you have, and now is the time to confess all in an email to Who, Me? ®