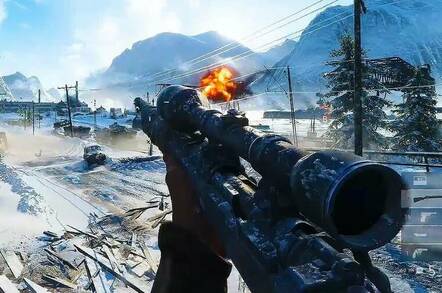 Linux in the cross-hairs ... A scene from Battlefield V (Source)

Linux gamers have found yet again that their ubiquitous operating system remains unwelcome in the context of mainstream entertainment.

The latest insult comes from Electronic Arts, which appears to have issued a few permanent bans to online Battlefield V players attempting to play the game on Linux systems.

Mind you, Battlefield V isn't intended for Linux; the EA game specifies that a 64-bit version of Windows 7, 8.1, or 10 is required. But those committed to Linux can get around that by using Lutris, a Linux gaming client.

Last month, a Battlefield V player claimed that attempting to play the game online using Lutris resulted in getting banned. It would seem to be the fault of EA's server-side anti-cheating system FairFight. A few others participating in the discussion thread said they too had been banned. That's not exactly a mass market catastrophe.

Yet after three weeks of social media fermentation, this latest Linux indignity bubbled up to Reddit and Hacker News, and on Thursday last week got the attention of Lutris Gaming.

Via Twitter, the makers of Lutris urged gamers – of all stripes, apparently – to avoid all EA multiplayer titles. "It has come to our attention that several Battlefield 5 players have recently been banned for playing on Linux, and that EA has chosen not to revert these wrongful punishments," the biz said. "Due to this, we advise to refrain from playing any multiplayer games published by @EA in the future."

You can imagine how this scolding has wounded Electronic Arts and its 9,300 employees. In fact, you can only imagine it because none of the three EA public relations professionals we attempted to contact to verify the gamers' claims bothered to respond.

The specific software that's getting flagged appears to be Wine (installed by Lutris) and/or DXVK, a Vulkan-based compatibility layer for Direct3D 11. Among those weighing in on the subject, an individual posting to Hacker News under the name "fxtentacle" – perhaps this fellow – contends that EA considers DXVK a cheating tool because it allows people to replace shaders, thereby enabling various graphics hacks and aimbots to work.

Cheating in online games remains an ongoing challenge, one that companies take seriously because it can, if left unchecked, ruin games. Unsurprisingly, it's a problem Battlefield V has struggled with, as can be seen from an extensive forum thread on the subject.

The Lutris-using gamer who claims to have been banned denies any cheating. Make of that what you will. Either way, don't expect 2020 to be the year desktop Linux finally makes its mark on the mainstream computing market. ®