Having trouble finding a job in your 40s? Study shows some bosses like job applicants... up until they see dates of birth 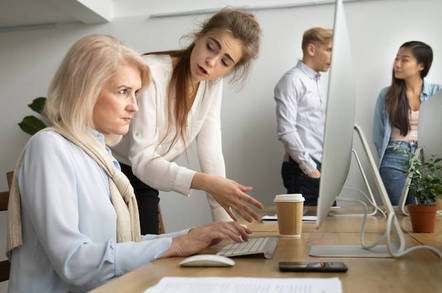 Age discrimination is a top topic in Silicon Valley, and now there's more proof that age may hinder hiring chances.

University of California-Irvine economics professor David Neumark has analyzed data from an age discrimination lawsuit, and found that older job applicants are provably hired less often when their ages were known.

As described in a paper [PDF] distributed through America's National Bureau of Economic Research, "Age Discrimination in Hiring: Evidence from Age-Blind vs. Non-Age-Blind Hiring Procedures," Neumark examined hiring data from a national restaurant chain that had a two-part hiring procedure. In the first phase, the applicant's age was not known and in the second, it was, creating a set of real world data to examine how age correlates with job offers.

Neumark declined to confirm the restaurant chain in question, but he served as an expert witness for the plaintiff in the case, EEOC v. Darden Restaurants, Inc. The NBER paper describes his analysis of hiring data that arose through unspecified litigation.

And, yes, sure, this case involves restaurants, though age discrimination is a well-known problem in the technology industry. In July last year, Google paid $11m to settle an age discrimination lawsuit involving 227 people, only to face another age discrimination claim two months later. IBM is alleged to have embarked on a systematic campaign to purge older workers from its ranks. Apple has faced age bias allegations, too. Between 2012 and 2016, 90 such claims were filed against Silicon Valley firms. And tech giants like Facebook have enabled age discrimination, along with other kinds of bias, though ads that target specific groups of people.

Neumark in a phone interview with The Register explained that age discrimination is a long-standing issue in many industries, not just the restaurant and technology worlds. While it's common to conduct experimental studies using fake resumes to observe differences in callbacks for job applications, he explained, it can be difficult to draw conclusions based on regression models.

"What's fundamentally different is we have this unusual circumstance that this company uses two different hiring procedures," he said.

In the first hiring procedure, done in person and on paper, applicant age data got revealed at the same time as other data. This age-aware process resulted in job offer rates that were substantially lower – by 68 per cent from the baseline job offer rate of 14.1 per cent for younger applications – for applicants age 40 or more.

The second hiring procedure was age-blind because it was done online initially and produced interview callback rates for older applicants that were equal or higher than rates for younger applicants.

"The net result is a lower job offer rate for older applicants (by 46 per cent, on a baseline hiring rate of 10 per cent for younger applicants)."

According to the AARP, an advocacy group for elders, 61 per cent of workers age 45 or older report seeing or experiencing age discrimination on the job. Other surveys offer similar evidence of age bias.

The US government's latest attempt to address the issue is the Protecting Older Workers Against Discrimination Act (POWADA). Introduced last year, the yet-to-be-approved legislation aims to reverse a 2009 Supreme Court decision that made it more difficult for older workers to prove age discrimination claims.

Neumark suggests a blind job application process, at some stage, may help reduce discrimination in some situations but allows that the problem can be difficult to address. He pointed to "ban-the-box" initiatives that limit when employers can ask whether job applicants have past criminal convictions. These can actually make racial discrimination worse, he said, pointing to a 2016 research paper on the subject.

"The evidence can be interpreted as showing that hiring procedures that elicit detailed information on job applicants without revealing membership in groups that may experience discrimination can in fact eliminate discriminatory outcomes," Neumark's paper concludes.

"It may not be realistic to expect employers to forego interviews completely, relying on hiring procedures that are completely blind to demographic or other characteristics of workers. But for some, perhaps lower-skilled jobs this might be more realistic." ®