iXpand? Sounds about right for the holiday season aftermath 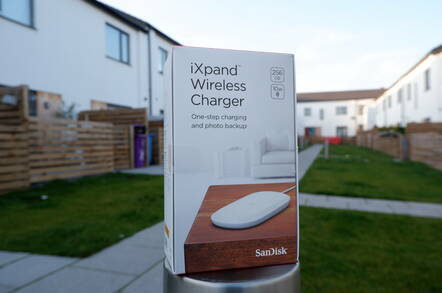 Review If you spend more than £400 on a mobile phone, odds are high it will include wireless charging, which allows you to replenish your device's battery simply by placing it on a flat surface – no cables required. Predictably, the market is flush with charging pads, some costing as little as a tenner. But what happens if you spend a bit more?

Answering that is the SanDisk iXpand Wireless Charger. This quirky device is a standard 10W Qi-compatible charger augmented with a decent whack of storage, allowing you to automatically back up your precious photographs while recharging your phone. It comes in 128GB and 256GB variants, costing £90 and £130 respectively.

SanDisk shipped The Reg a unit last month, and it's a curious beast. That's not necessarily a bad thing. I've tested my fair share of esoteric kit in my time, and it's the most unusual products that disappoint – either by overpromising and underdelivering, or having awkward usability flaws that endlessly frustrate.

That isn't the case here. For the most part, the SanDisk iXpand Wireless Charger delivered on all its promises.

It comes with a spacious charging surface that, although it consumes a lot of desk real estate, allows you to replenish your phone in either landscape or portrait. And unlike other cheaper units, it doesn't require much fiddling to get your device in the right position to charge.

Thermal management is exceedingly good, with neither the mat nor the phone getting too hot. The charging surface is constructed out of a rubbery polymer which isn't too grippy – allowing you to easily retrieve your blower.

All things considered, it's a solid wireless charger. But what about its unique selling point – automatic backup?

SanDisk sent us the 256GB version. Setting it up requires the download of an app and going through a fairly standard wizard, which took all of five minutes. I did notice a few awkward glitches along the way. Annoyingly, it was unable to recognise my 5GHz wireless network, forcing me to fall back to the 2.4Ghz band. The charger also hung while updating the firmware, which gave me pause for concern.

After that, however, it was plain sailing and the app automatically began entombing my tedious Instagram food snaps to its internal storage. After that, I was given the option to delete them from my phone, which would give me more space to play with.

It also lets you back up your contacts, which is handy if you want to preserve your digital rolodex somewhere other than Google's cloud.

The SanDisk iXpand Wireless Charger allows you to set up password protections to prevent naughty folk gaining access to your stuff. You can also share the storage with other members of your household. This feature would most likely come in handy on the 256GB version, given that most people don't have nearly that amount of internal storage on their phones.

All things considered, it's a polished product that does what it says on the box. That said, we do question its reason for existence.

Both iOS and Android allow you to automatically back up your photos and contact information to the cloud. And, for better or for worse, it's dirt cheap. 79p a month will get you 50GB of iCloud storage and for £16, Google will rent you 100GB of storage through its Google One programme, which can be shared with other family members.

Of course, you could make a privacy argument in favour of ditching the cloud for your own on-premises solutions like this. By having your pics on your own local storage, you make it harder for data slurpers to analyse them for their own creepy adtech purposes.

Another line of questioning would suggest that this kit is more resilient to hackers and other digital ne'er-do-wells. After all, when your precious memories are housed in a data centre somewhere, there's always the possibility that someone could remotely obliterate them.

And while those arguments may ring true for privacy and security-minded punters, they may not for the wider public. ®