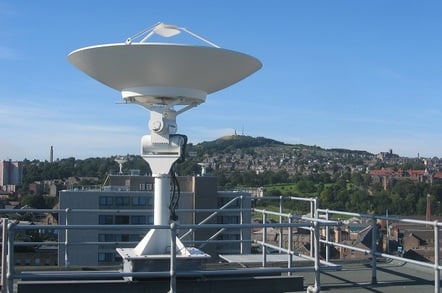 Scotland-based boffins may have snatched victory from the slavering jaws of bureaucratic indifference with the relocation of Dundee's satellite data-slurpers to a handy airfield.

It all looked rather bleak last year as a curtain was seemingly drawn over more than 40 years of operation. The Dundee Satellite Receiving Station (DSRS) had lurked within the halls of Dundee University and captured data from passing satellites, providing an invaluable source of meteorological data (and other information) for scientists the world over.

The loss of £338,000 in funding from the Natural Environment Research Council (NERC), which reckoned that the work being done by the Scottish setup could be performed just as well elsewhere, brought the fun to an end. Dundee University, with its principal trousering between £270,000 and £279,000 in salary, professed itself unable to make up the shortfall.

The university appeared determined to swing the axe, even as scientists came up with plans to eke out the remaining funds and pick up business from Scotland's burgeoning CubeSat and small-satellite industry. Heck, even some sniffing around by Glasgow-based Clyde Space, founded back in 2005 and now part of ÅAC Microtec, was not enough to stay the execution.

And so, even after the addition of protestations from NASA boffins, the lights finally went out.

It seems, however, that the Grim Reaper of satellite data-receiving installations had reckoned without the determination of the team, whose members managed to save large chunks of the facility as the hammer came down.

"We rescued all six tracking antennas," Neil Lonie, one of the former DSRS staffers, told The Register, "the five that were installed on building rooftops and still in use when the station was closed (2.4m, 3 x 2.8m and 3.7m) and the small 'Tiny Tim' antenna (1.2m) that was in short-term use for extra coverage when some antennas were being replaced in the early 2000s."

As well as those used for collecting polar satellite data, a three-metre fixed antenna for capturing geostationary satellite data was also saved.

While the receivers and other gear needed to control things, along with much of the laboratory facilities, were also wheeled out of the facility, "the university physics department retained the best of the test equipment."

That said, Lonie told us: "Our relationship with the School of Science and Engineering has always been good and they backed our plans to continue within the university."

Sadly, the bigwigs had other ideas.

Onwards and upwards, however, and (assuming consent is granted) the dishes will receive data once more following commissioning at the former RAF Errol Airfield.

That site, Lonie told us, "would see four of the tracking antennas and the 3m GEO antenna installed."

Approximately 100m x 35m of the old runway will be used for the site, replete with a 2m-high security fence ("annoyingly, the single most expensive item," observed Lonie.)

Plans are also afoot for a second location in Scotland for more tracking antennas.

Of course, it all hinges on planning approval being granted by Perth & Kinross Council's planning department. The gang are hoping for a sign-off by the end of February and to have at least one of the antennas up and running a month later.

While Scotland professes itself as wishing to be a centre for space business, the likes of rocketeers Skyrora have stumbled following objections by locals to the thought of rocket engines firing up in the vicinity. Lonie reckons that few will mind some dishes sat on an old runway – after all, the things had been running in the centre of Dundee for decades with approval and without complaint. The site will also be mostly run remotely.

The antennas are currently stored at the airfield and the rest of the gear is currently lurking "in various spare rooms and garages of friends and family," according to Lonie. He added: "The data storage system and web server etc, are still in the University of Dundee while we wait for them to archive the data for backup purposes."

Once this is done, the IT gear can also be picked up and relocated to support future Earth Observation data applications.

Of course, the thorny issue of funding remains. And while Dundee University may now be bereft of its principal (and soon its vice principal), Dundee Satellite Station Ltd will have to make ends meet its own way.

"Initially," said Lonie, "we have to focus on the biggest business case, which is the small satellite support, and we are already in discussion with several potential partners on this."

This means that the free access enjoyed by the public to Earth Observation data may have to wait until the team can work out how to make it "financially viable."

That pondering has featured a Yorkshire Tea-obsessed Twitter account and the customary (nowadays at least) crowd-sourcing. The usual health warning must apply to the latter, although at least by lobbing a tenner toward the purchase of a satellite dish you won't have to wonder if some plastic tat will ever show up.

Lonie added: "We are still open to collaboration with academic institutes, including Dundee, but are currently in discussion with others."

We asked both Dundee University and the UK Space Agency for their thoughts on the progress made by the team, but have yet to hear back from either. ®

A spokesperson from the University of Dundee got in touch yesterday evening. Regarding the Dundee Satellite Station, he said: "This is a commercial venture independent of the University so it isn't our place to comment." While the principal has indeed stepped down because, according to a statement, "the University's vision for its future and the values it holds are different to the aspirations of Professor Atherton," Vice Principal Nic Beech "is currently our Vice Principal (Provost)" but will "take up the post of Vice Chancellor of Middlesex University next month."