We pick one technology highlight for each of the Big 3 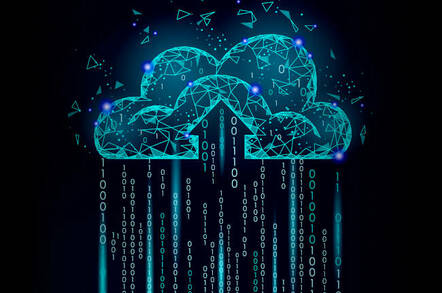 Cloud computing in 2019 continued to dominate IT

Analysis Three technology giants continued to dominate cloud computing in 2019, with each bringing in some interesting tools to play with as they sprawled over smaller players.

The big picture did not change radically in 2019. All the big three cloud providers (or big four if you consider Alibaba’s growth in East Asia) continued to grow at a dramatic pace. In the quarter ending September 30 2019, AWS reported 34 per cent revenue growth and Microsoft Azure 59 per cent growth compared to the same quarter a year ago. Google did not offer an exact figure for the quarter but said that (PDF): “Other revenues for Google were $6.4bn, up 39 per cent year-over-year, once again fuelled by cloud.” 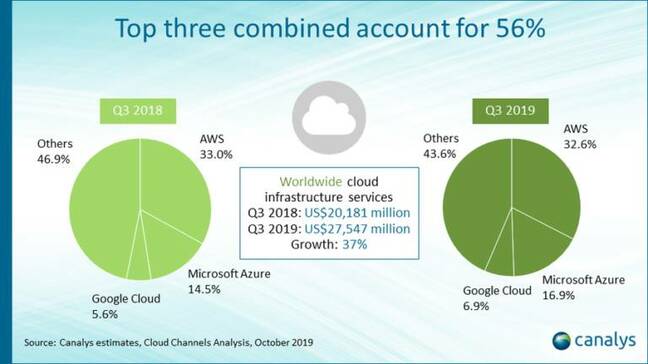 The difficulty in measurement is for several reasons. One is that IaaS is a vague term. A cloud-hosted virtual machine (VM) is undoubtedly IaaS, but the cloud vendors are keen to sell their premium services which stray towards PaaS (Platform as a Service) or even SaaS (Software as a Service). Microsoft’s share leaps ahead if you chuck in everything Office 365, since AWS has little in the way of SaaS, and this is important since it is synergy between Office 365, Azure and on-premises that drives its growth overall. Another issue is that neither Microsoft nor Google breaks out IaaS revenue, preferring to state percentage growth (when it suits them).

What happened in 2019? There is a constant outpouring of product announcements from all the cloud vendors, most of them not very interesting, but still a regular flow of significant news. If you could pick just one thing though, what would it be?

For AWS, that one thing is probably Outposts, even though it was first previewed in late 2018. Outposts is the AWS experience but physically on-premises, solving both latency and compliance issues, while also being an expensive way to run your servers. Canalys estimates that “AWS will be a top four on-premises server vendor in the US and Western Europe within three years.” In the past it has been Microsoft which led the way in hybrid cloud, with technology like Azure Stack and Azure AD Connect. Outposts is not quite the same thing, but it is hybrid cloud, and looks like a tidy solution. See here for our chat with an AWS architect about its significance.

Over at Google Cloud, the biggest thing must be Anthos, announced in April, or perhaps the technology behind it – yes, Kubernetes (K8s), the container orchestration platform which is open source but invented by Google. Anthos wraps K8s into a hybrid cloud solution which lets you run applications on premises, on GCP, or even on other public clouds. K8s has huge momentum and represents both GCP’s biggest technical advantage and an awkward technology for AWS to navigate – even though AWS claims to be the biggest K8s cloud provider. No surprise that AWS CEO Andy Jassy told us, regarding K8s, that “I don’t believe in one tool to rule the world”.

What about Microsoft? It was in late 2018 that the company completed its acquisition of GitHub, but this was perhaps the key point of interest in 2019. In particular, Microsoft has done interesting work with devops, and the general availability of both GitHub Actions and GitHub Actions for Azure – which lets developers automate the process of checking in code all the way to deploying containerised applications, web applications or serverless applications – is potentially a strong driver for Azure cloud adoption.

We visited cloud events from all the big three this year. At GCP Cloud Next in London, the company impressed with its engineering excellence, though the platform feels small in scope compared to its rivals. Microsoft Ignite showed the company’s skill in packaging its clouds into services that are easy to adopt, though there are always awkward corners, like what happened when we asked about Azure and Intel speculative execution bugs. And AWS re:Invent was monstrously large, with the impressive Outposts announcement, but also showing signs of agitation, not only with respect to K8s, but also indignation at Microsoft winning the US Department of Defence Jedi contract.

Best 2019 in cloud? It is hard to pick a winner; maybe Microsoft for 2019, although AWS seems more promising for 2020 and Google is likely to continue nibbling at the market share of both.

More of the same in 2020? Probably, but some are sounding a note of scepticism. Blogger Cal Peterson remarked on the “Amazon premium”, noting that all the big three are much more expensive than smaller hosting providers, and referencing what happened when PHP inventor Rasmus Lerdorf compared VMs from numerous providers. What the big three public clouds offer is amazing in its scope, but for sheer value, look elsewhere. ®