I'm ready to throw it all in 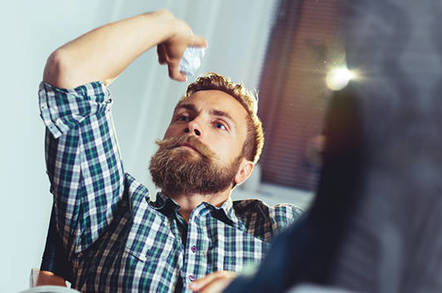 Something for the Weekend, Sir? Brussels sprouts make excellent projectiles, but only if they're boiled and undercooked. This much I discovered from experience as a youngster in the school refectory as we drew towards this festive time of year. Ho ho ho, what japes.

I use the term "refectory" with precision: high ceiling, wood-panelled walls, long tables with benches, starchy odour, cold. There was none of the modern "canteen" about it. A monk would have felt at home there.

As you may have gathered, mater and pater sent one to a private school and thereby stigmatised one for life as a filthy rich posho whose school friends grew up to be cabinet ministers, married into royalty or simply basked in their innate superiority alongside their fellow reptilian illuminati. I wish. The reality is more complicated: in my case, it was not so much Alexander Boris de Pfeffel, more Nigel Molesworth.

Food fights were unheard of – I disapprove of the waste on principle – but a well-aimed, aerodynamic aliment arching across a high-ceilinged hall to land precisely on the top of a distant comrade's head can be a striking sight. Forget Beckham's free kicks. Sod Hogarth's line of beauty. The ideal fodder-flinger never sought praise; in fact, avoiding detection and deflecting blame were essential factors to achieve an optimum performance.

I raise this historical matter now only to counter a claim this month by researchers at the Research Institutes of Sweden (RISE) that they have just conducted the "first aerial food delivery". Sorry, kamrater, but I was doing this in Yorkshire back in the Seventies. While wearing shorts, even (chiz).

What RISE has in its favour is, of course, engineered hardware to conduct the delivery. Instead of flinging chewy, boiled pre-Christmas sprouts across a crusty old hall, the researchers arranged a drone to pick up a food box from a restaurant on the outskirts of Linköping and land it gently in the city's University grounds.

OK so their delivery went further than mine but it's hardly a "first", is it? And I was doing it BVLOS*-styleee years ago, as my Brussels would reach their apex just below the oak beams. According to RISE's video record (below), the Swedes weren't even able to target the top of someone's head upon arrival. Amateurs.

[* Beyond Visual Line Of Sight]

I'm not reassured by RISE's ongoing development of what it calls its Drone Safety Service (DSS). Apologies if I have got this wrong about DSS, but every other safety system claimed by drone developers to date concerns itself with avoiding mid-air crashes. That is, they are designed to keep the drone safe from harm. They don't directly deal with keeping the tops of our heads safe from harm when malfunctioning drones with up to 15kg payloads pitch wildly out of the sky with blades still spinning.

For me, any drone safety system should mandatorily include a parachute and an audible voice alarm shouting: "Please stand aside! Disruptive technology falling! May contain cashews."

But then, of course, we're all just potential collateral damage in someone else's beta test.

Yes, I know, in the latest tale of woe involving a Tesla Model 3 on Autopilot, the not-actually-driving driver should not have been attending to his pet dog at the time. Going further, perhaps he should not have been engaging Autopilot at the time, either. Or ever. Not at least until the feature works reliably or is fitted with adequate levels of redundancy.

Look, if my aim was off in the refectory, the worst that could happen is that the buds of my brassica oleracea might land on a master's shoulder in error. Once I had one land rather spectacularly yet wholly unintentionally in someone's glass of water, earning a ripple of polite applause at the destination table. But if Autopilot's aim is off on the roads, bad things can happen.

Ah well, I suppose it's all for the best: Autonomous car firms are still fixing technical glitches in their systems. Just tell yourself it'll all be worth it in the end for those of us left alive amid the carnage of any potential real-world prerelease programs.

Right, now that I've cheered you all up, I'm off to beta-test some appropriately steamed sprouts on Mme D while streaming Queen Lizard on BBC iPlayer. Let's see if my aim remains true after all these years. If nothing else, it'll be illuminating.

Alistair Dabbs is a freelance technology tart, juggling tech journalism, training and digital publishing. On the subject of cars, he finds himself temporarily without a private vehicle, having disposed of his 20-year-old SUV but still searching for a downsized replacement. You might say he is caught "between vehicles" but in the case of Tesla this expression can be literally ambiguous. @alidabbs