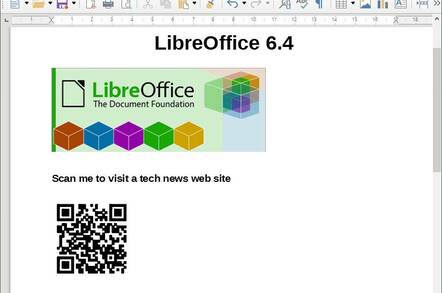 The LibreOffice team is testing the first release candidate of version 6.4, which is set for release at the end of January.

What's new in version 6.4? There are numerous fresh features; most are small, but they do include the ability to insert QR codes into any document. The Generate QR Code feature lets you enter a hyperlink (or any text) and generate a QR code with four options for complexity. A low complexity is better for long URLs while high has better error correction if there are errors in reading.

Another neat feature is called full sheet previews. This is for spreadsheets, and lets you specify that you want an entire sheet on one page in PDF export. In effect this is a "shrink to fit" option that is handy if you are frustrated to find that your spreadsheet has been broken into separate pages, ruining its appearance. If your sheet is hundreds of rows long though, it will be rendered unreadable, so use with caution.

When you select all the rows in a table in a word processor document, and then choose Cut, should it cut all the text but leave the table? Or cut the table? LibreOffice used to do the former, but now does the latter. In Word it would do the former, unless you specifically "select table". The new LibreOffice behaviour is probably what the user expects, but it is a tricky issue, particularly since if you select only one row and choose Cut, it only cuts the text, not the row. Table-editing controls have also been added to the Writer sidebar.

There are improvements in compatibility with Microsoft Office formats. Endnotes can now be shown on the last page of text as opposed to on a separate page, and SmartArt is more likely to import and export correctly, as are gradient backgrounds in PowerPoint.

A bit of history

The history of LibreOffice goes back to 2010, after Oracle completed its acquisition of Sun Microsystems. This included OpenOffice, an open source Office suite originally known as Star Office. Sun had picked up the Star Division, the company behind Star Office, in 1999, and published the suite as open source in an effort to reduce the dominance of Microsoft Office.

The following year, Oracle decided that OpenOffice had no commercial future and in June 2011 transferred the project to the Apache Foundation, where it continues, with a claimed 1.6 million downloads of version 4.1.7, released in September. LibreOffice had the momentum though, and has been developed more rapidly.

Tenth anniversary next year - but has LibreOffice succeeded?

2020 is therefore the 10th anniversary for LibreOffice and it is planning "a year long celebration."

Has LibreOffice succeeded? The software is popular and highly valued by users, and unlike Microsoft Office works well on Linux. It is free software and also lets you adopt the OpenDocument Format (ODF) in place of Microsoft Office formats. LibreOffice still has a place for organisations (not least the EU) concerned about retaining or recovering "digital sovereignty."

That said, Microsoft Office remains the business standard and today's battle is more between Office 365 and Google's G Suite, than between Microsoft Office and LibreOffice. Most Office 365 subscriptions bundle Microsoft's desktop software with email and other online services, making it hard for LibreOffice to break in.

LibreOffice then has not changed the software world, but it has perhaps made it a better place.®

Free open source office suite gets better, but use the redaction tools with care