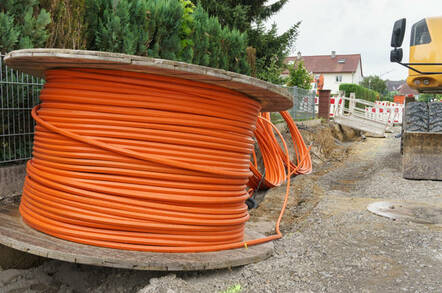 Problems kicked off on 19 December at 09:00 UTC as cables were accidentally ripped from the ground during construction work in the southwest London suburb of New Malden, leaving many customers in the region without internet. Thousands of fibres were inadvertently severed.

While engineers were dispatched to deal with the problem, users naturally took to social media (presumably on devices not served by Virgin Media) to vent their spleen.

Funnyman Mitch Benn, also affected by the snafu, summed up the problem via the medium of Twitter:

And 2. It takes Virgin Media approximately 31 hours to replace one cable.
Doesn’t say great things about VM either way

Emails shown to The Register by a business customer show how the problem worsened. During efforts to find the break in the line, a mechanical digger accidentally severed a gas pipe as night fell on 19 December.

Naturally, all work had to stop until the gas leak was dealt with (at least to the point where the digger could be safely moved) but it took until dawn on 20 December before the break was temporarily plugged. In the meantime, engineers continued the task of pulling through and painstakingly splicing in new cables elsewhere.

The company issued and reissued estimates for when service might be restored as the weekend wore on, while customers complained that some users appeared to be more equal than others.

@virginmedia How come you managed to provide alternative service to Business Customers? Furthermore you provide Business Customer's with regular updates. Do you believe domestic customers don't deserve the same level of respect?

More likely, some customers pay a good deal more for stricter SLAs than others.

At one point even the service status page fell over, further enraging users.

So @virginmedia has been down in SW London since Thursday morning due to builders accidentally ripping up cables; the estimated time for restoration of service was 4pm, then Friday 9pm, then 9am today, then 5pm today, now the page that shows the estimates is ALSO down.

As it turned out, it wasn't until the morning of 23 December that the company announced that engineers had finally fixed the severed cables. It also began offering compensation for those who had missed the weekend's festive television or Christmas YouTube sensation thanks to the borkage.

Hi, Our engineers have now successfully fixed the broken fibres in New Malden meaning most residents are back online. However, some remedial work still needs to take place to ensure all customers have connectivity restored. This work is ongoing. We’re ... https://t.co/Yk8bHLkfRe

Virgin Media is no stranger to borkage, with some embarrassing outages in 2018. 2019's latest and greatest, however, is particularly impressive due to the length of the downtime.

The Register spoke to the company, which told us: "We would like to once again apologise for this issue and the inconvenience caused. We will be providing compensation to all customers impacted by the loss of service as a result of the fibre break in New Malden. This will be applied automatically to customers' accounts." ®

* Total Inability To Serve Up Pr0n