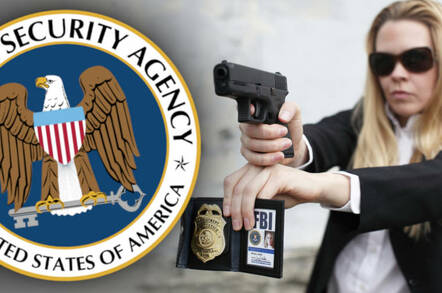 Analysis The FBI is likely breaking the Fourth Amendment, which protects against unreasonable searches, when it investigates domestic crimes using an NSA database created from international wiretaps, an appeals court ruled Wednesday.

In a decision [PDF] that could put an end to a practice that civil-liberties groups have decried as illegal for years, the US Court of Appeals for the Second Circuit noted that the way the Feds today use a database of seized communications “would be at odds with the bedrock Fourth Amendment concept that law enforcement agents may not invade the privacy of individuals without some objective reason to believe that evidence of crime will be found by a search.”

At issue is the controversial Section 702 of America's Foreign Surveillance Intelligence Act, which earlier this year was the subject of considerable concern within Congress when it was renewed.

The spying program allows the NSA to grab information on non-US persons if it feels they represent an intelligence threat. Often that data grab is performed on servers located on American soil, even when the person of interest is abroad, thanks to the way internet routing works. Tech giants, like Microsoft and Facebook, frequently hand over information on specific individuals and accounts when asked to by Uncle Sam.

In this case, a US citizen who was jailed as a result of that NSA spying program appealed against his sentence (he had admitted providing material support to a terrorist organization) claiming that evidence against him was obtained illegally. Specifically, he claimed he was collared only after the FBI searched the database initially without a warrant and later applied for the paperwork when it was sure it had nailed him.

The appeals court decided against some of his arguments, and was clearly in favor of others. For example, the court ruled that it was not against the Fourth Amendment for the US government to “incidentally” gather information on US persons as part of the program. Nor was it illegal to store that information if there evidence of a possible crime.

But, the appeals court noted, a subsequent query of that database at some future date specifically for a US person would almost certainly require a warrant. Without it, the authorities are breaking the Fourth Amendment on unreasonable search. And, crucially, it's generally feared the Feds aren't getting these warrants before they dip into the silo of eavesdropped communications.

Critically, the court not only rejected a previous decision by a district court on this very issue but it also referenced two critical recent Supreme Court decisions on privacy in the modern digital world (Riley and Carpenter) when it made its opinion clear.

The district court had earlier agreed with the government’s argument that if it has legally gathered all the information in the first place, then it made no sense for it to be illegal to look at that information at a later date unless it got a warrant.

It gives three reasons. “First, courts have increasingly recognized the need for additional probable cause or reasonableness assessments to support a search of information or objects that the government has lawfully collected.”

It gives the example of the Supreme Court’s Riley decision where the police can lawfully seize a mobile phone but that does not entitle them to look through the contents of the phone without a warrant.

It gives another example of where the police seized a man’s computer while looking for tax fraud, couldn’t find anything, but then combed through the computer looking for evidence of other crimes.

In that case: “The Ninth Circuit concluded that the searches beyond the scope of the warrant were improper, noting that the government "should not be able to comb through [the defendant's] computers plucking out new forms of evidence that the investigating agents have decided may be useful" after it failed to find evidence of willfulness regarding the tax returns.”

The second reason given for why the FBI should be allowed to search through the Section 702 database for whatever it wants is the sheer size of the program. Describing it as “sweeping in its technological capacity and broad in its scope,” the Second Circuit notes that at least 250 million emails are being grabbed and stored annually and says it looks more like a dragnet than a careful gathering of evidence.

“The vast technological capabilities of the Section 702 program… may mean that analysts are not reviewing each of those e-mails contemporaneously… If such a vast body of information is simply stored in a database, available for review by request from domestic law enforcement agencies solely on the speculative possibility that evidence of interest to agents investigating a particular individual might be found there, the program begins to look more like a dragnet, and a query more like a general warrant, and less like an individual officer going to the evidence locker to check a previously-acquired piece of evidence against some newfound insight.”

It references both the Riley and Carpenter Supreme Court decisions to highlight the fact that digital technology has made the accumulation of vast amounts of information easily storable and searchable, and the legal implications that comes with that.

And third, the appeals court notes that “as a practical matter, querying is problematic because it may make it easier to target wide-ranging information about a given United States person at a point when the government knows it is investigating such a person.”

It notes that the law, Section 702, specifically “forbids the government from targeting a non-United States person as a backdoor way of targeting a United States person” but notes that the current practice is effectively doing exactly that. “The NSA may have collected all sorts of information about an individual, the sum of which may resemble what the NSA would have gathered if it had directly targeted that individual in the first place.”

As such, allowing the FBI to search such a database without a warrant “just to see if there is anything incriminating in any conversations that might happen to be there, would be at odds with the bedrock Fourth Amendment concept.”

In other words, as civil liberties lawyers, some senators, and plenty of journalists have pointed out, the FBI’s currently unlimited access to its Section 702 database without the need for a warrant is clearly unconstitutional.

But that is very far from the end of this case. The appeals court has not determined that the FBI’s querying is illegal because of the constraints into the case itself. The US government has argued that it didn’t actually use this method to find information on the man in question - Agron Hasbajrami - and so there’s no case to answer.

Remember the FBI's promise it wasn’t abusing the NSA’s data on US folks? Well, guess what…

That position was provided at the very last minute and upended years of preliminary legal actions (the case started in 2015) and was met with heavy skepticism in court at the time.

But, as a result of that assertion, and the fact that the US authorities have consistently refused to provide any information of what information it actually holds on Hasbajrami, or how it gathered it, or how it searched for it, the appeals court was forced to concede that it simply doesn’t know what happened in this case.

As such, it has sent the issue back down the district court and told it that it “must conduct an inquiry” into precisely what happened and then made a judgment based on what it finds.

What that means is that the intelligence services will now have years to reorganize and rearrange their systems and evidence in a way that they can tell the courts and Congress no longer infringes the law. As they have done multiple times before.

That said, today’s judgment has finally put the issue of the FBI’s unconstrained ability to search a database intended solely for non-US persons for incriminating information on US persons in the legal spotlight after years of hard-fought-for legal campaigning. And the courts were clear in their commonsense judgment: it is illegal. ®

OK, it's time to talk mass spying again: America's Section 702 powers are up for renewal

Analysis And tech groups are starting the fightback now