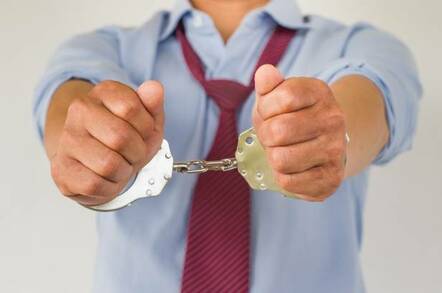 A now-former Palo Alto Networks IT administrator illegally exploited his employer's confidential financial figures to line his pockets with stock-market profits, it is claimed.

Janardhan Nellore, 42, of Milpitas, California, clocked the numbers and made trades of the US giant's securities, occasionally from his own work computer, ahead of their public release, allowing him to bank a profit by predicting which way the share price would turn, it is alleged.

Nellore, who worked at the networking gear manufacturer from 2012 until his termination this year, also tipped off accomplices Sivannarayana Barama, Ganapathi Kunadharaju, Saber Hussain, and Prasad Malempati, who made trades of their own and occasionally kicked back a portion of their ill-gotten gains to the IT bod, it is claimed.

The multimillion-dollar scam started in 2015 when Nellore was promoted to a management role in the IT department, and peaked in 2017, America's financial watchdog, the SEC, alleged. All five of the group were charged on Tuesday with insider trading by the regulator.

"At the peak of their scheme in 2017, Nellore, Barama, Kunadharaju, Hussain, and Malempati achieved more than $7m in illegal trading profits," the SEC said in its complaint [PDF], filed in a San Jose federal district court this week.

"Defendants continued to trade on the basis of Nellore’s inside information through 2018, but with mixed results."

To cover the stock purchases and sales, the SEC claimed, Nellore and his pals used code to communicate about their trades. Nellore would tell the traders about information on "baby," meaning Palo Alto Networks, ahead of the Silicon Valley business's public financial filings and news releases. The crew also sought to hide the activity by paying Nellore his kickbacks in payments of less than $10,000 so as to not alert their banks, it is claimed.

"Nellore and his friends exploited Nellore’s access to valuable earnings information and attempted to hide their misconduct using code words and carefully tailored cash withdrawals,” said Erin Schneider, director of the SEC’s San Francisco office. "This case highlights our use of enhanced data analysis tools to spot suspicious trading patterns and identify the traders behind them."

Palo Alto as a company is not accused of any wrongdoing.

It probably does not help Nellore's defense that, after being interviewed by the FBI about his stock trades back in May, the admin bought himself and his family one-way tickets from the States to India in what could be seen as an attempt to flee. He was collared at the airport.

In addition to the insider-trading charges, Nellore, Barama, Kunadharaju, Hussain, and Malempati face permanent injunctions, disgorgement of the money they made from the trading, and additional cash penalties. ®

Top tip for all you insider traders: Don't Google 'insider trading' from your work PC

Consultant was all too app-y to break law, claim investigators