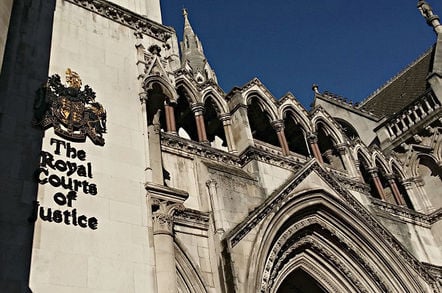 BlackBerry, the former phone handset company, has accused rival security business SentinelOne of systematically poaching its top talent during a court hearing in central London where the Canadian company tried to block a salesman from jumping ship.

The case was brought over Lloyd Webb, Cylance's EMEA veep of sales engineering. Webb wants to join SentinelOne. Blackberry UK, as legal owner of Cylance's UK operations, wants to stop him from doing that because, it claims, he will take confidential business knowledge with him and use it for SentinelOne's advantage.

Webb is resisting Blackberry's attempt to stop him from taking up a similarly senior sales engineering post with SentinelOne. The latter company was formed in 2013, while Blackberry has been around for many years. Two years after making a decision to stop designing and making its own handsets in September 2016, BlackBerry bought Cylance in 2018 for $1.4bn. This was part of the firm's larger push into the enterprise security market beginning in 2013 and culminating in the formation of its cybersecurity Services division in 2016 (PDF).

At last Friday's preliminary hearing in London's Royal Courts of Justice, Wilson continued: "The claimant [Blackberry UK] says Mr Webb was in such a senior position with so much exposure to, firstly, its sensitive technical information about its products, and, secondly, its strategic sales information. That if he were to immediately start in what would be an equivalent role at Sentinel, a direct competitor, he would inevitably make use of the confidential information in his head about the claimant's products on which he has worked for four years."

The case hinges on non-compete covenants in Webb's contract of employment. His barrister, James Gibbons, argued strongly that BlackBerry ought to be entering mediation rather than pressing on with court hearings to block Webb from taking up a similar post with SentinelOne.

BlackBerry's barrister said: "We know from US proceedings [SentinelOne] has recruited three very important individuals and you'll have seen the allegations that are made, there is a real risk they've taken confidential information with them. I don't put it any higher than that."

One of those American cases was reported by US legal newswire Law360 in October.

Webb was also alleged by Wilson to have "wiped the contents of his company laptops before he returned them," something he said Blackberry saw as "not innocent" while stressing "we don't put it any higher than that".

Arguing for "ADR" (alternative dispute resolution) on behalf of Webb, his barrister Gibbons also said some of BlackBerry's evidence contained "material inaccuracies… demonstrably so". Referring to a witness statement from a Mr Thomson, he read out a part describing how one Scott Scheferman was injuncted in the US to stop him jumping from Cylance to SentinelOne.

Thomson, author of the witness statement, had made a mistake, said Gibbons. In a correction to his statement, Thomson was said to have accepted that Scheferman "wasn't actually enjoined [injuncted]" from joining SentinelOne, saying: "It was unfortunate that he [Thomson] was not able to, in his witness statement dated I think either 29th November or 5th December, I can't remember which – it should have been disclosed that the order was discharged. That is an inaccuracy in a peripheral matter but is part of their [BlackBerry's] case."

Deputy High Court judge Hugh Mercer QC, sitting up on the bench, frowned at this. "I don't think it's peripheral… A campaign is implicit in the fact that three people were poached in the US."

"Also part of that suggestion [is] that they're all being stopped from competing," rejoined Gibbons. "[It is a] positive assertion that other courts have stopped them from competing and that's wrong, it's completely wrong."

Gibbons also complained that BlackBerry had put several hundred working hours into its application before dropping it on Webb, whose lawyers only had time to put 30 hours of work into his response before the hearing, arguing that his client needed more time to fully respond.

Granting Webb's application to adjourn the hearing until January, Judge Mercer said: "In my judgment it is fair that the defendant be granted a proper opportunity to prepare their evidence in order to respond to the application which is being made before me today."

A speedy trial date is expected to be set for January or February next year. ®