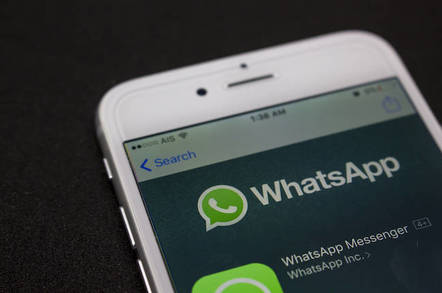 Security investigators say they have uncovered a vulnerability in WhatsApp that will gladden the heart of anyone who's ever wondered how to permanently wipe that incriminating group chat.

Researchers from infosec biz Check Point say they have found a flaw that lets a helpful malicious so-and-so "deliver a destructive group chat message that causes a swift and complete crash of the entire WhatsApp application for all members of the group chat."

Not only that, but the crash is "so severe that users are forced to uninstall and reinstall WhatsApp on their device". Having done so, they will find that the group chat "cannot be restored after the crash occurs and would need to be deleted in order to stop the crash-loop," thus "causing the loss of all the group’s chat history, indefinitely."

The bad good news is Whatsapp has already deleted patched this helpful feature vulnerability. Version 2.19.246 and later are not vulnerable to crashing the app and destroying your group chats through Check Point's method.

Whatsapp thanked Check Point in a statement for reporting the vuln through its bug bounty programme.

"WhatsApp greatly values the work of the technology community to help us maintain strong security for our users globally," said Whatsapp software engineer Ehren Kret. "Thanks to the responsible submission from Check Point to our bug bounty program, we quickly resolved this issue for all WhatsApp apps in mid-September. We have also recently added new controls to prevent people from being added to unwanted groups to avoid communication with untrusted parties all together."

Giving the Facebook-owned chat app's operators a pat on the head, Check Point's Oded Vanunu beamed: "WhatsApp responded quickly and responsibly to deploy the mitigation against exploitation of this vulnerability."

Back in May this year, Whatsapp was the subject of a zero-day exploit that allowed the remote injection of spyware onto a target's phone through the use of a booby-trapped voice call that didn't even need to be answered. A duly enraged Facebook filed a US lawsuit against noted spyware purveyor NSO Group in October.

Last year Check Point discovered that it was possible to manipulate Whatsapp messages. Today's disclosures build on its earlier work, the company said. ®