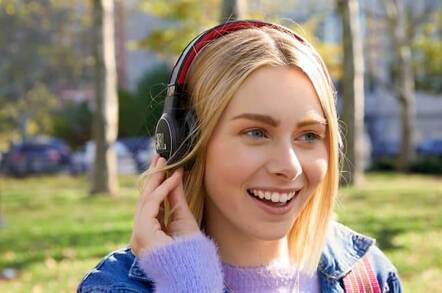 It's hard, isn't it — plugging in kit? You've got to grab the item in question, find a charger, and then give it a bit of USB-C. Wouldn't it be simpler if your gadgets just magically charged themselves, using the abundant energy provided by the Sun's rays?

Well, that's the basic premise behind the JBL REFLECT Eternal. Announced yesterday, it includes a strip of photovoltaic cells across the headband. These, it says, can provide 68 hours of playtime from just 1.5 hours of sunlight.

With the REFLECT Eternal, JBL has elected to use Exeger's flexible Powerfoyle solar cells, which can draw power from direct and indirect indoor light, as well as that from the sun. This, in theory, means that it'll continue to charge, even when dropped on a kitchen table with the curtains closed.

Exeger is arguably one of the most intriguing players in the consumer tech solar space. This year, it secured $20m in funding from Softbank across two rounds. This was before the firm had even shipped a product. Other investors include a major Swedish pension fund.

And then there's JBL, which is one of the largest players in the consumer audio sphere. It's owned by Harman International, which is itself a subsidiary of Samsung. That makes it more than a little curious the firm has decided to crowdfund this device on Indiegogo, rather than merely release it directly to market.

Arguably, this path allows JBL to test the waters before committing to a major production run. Of course, a cynic would argue it allows the firm to skirt most consumer protections, as they're not buying kit, but rather "backing a project".

JBL has already hit its "perk goal" of 500 units. The firm is also doing a fairly limited run, with just 1,250 devices available to snatch. If you want one, you can grab a pair of cans for £75, albeit with one caveat — JBL is only shipping devices to Germany and the US.

One last bit of throat-clearing: crowdfunding campaigns can (and often do) go wrong. There's always an element of risk to backing one, even if it comes from a relatively well-known name. ®