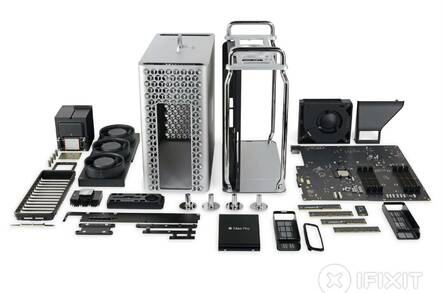 DIY repair site iFixit has announced the results of its teardown of the 2019 Mac Pro – the latest eye-wateringly priced, professional-oriented computer from fruit-branded-biz-turned- kitchenware supplier, Apple.

And while the Mac Pro looks like cheese grater and costs a lot of cheddar, you’ll be delighted to discover it’s no stinking bishop. With PCIe slots galore, and modular RAM that isn’t soldered to the motherboard, Apple’s latest tower is delightfully easy to repair and upgrade, or so iFixit found.

The screwdriver botherers bestowed the Mac Pro with a repairability score of 9. That’s pretty much unprecedented for Apple’s latest crop of machines. The 16-inch MacBook Pro, for example, has a score of just one, with most components either soldered or glued in place.

In its teardown, iFixit commended Apple for the ease in which punters can open the case, remarking that some simple procedures require no tools at all.

It also lauded Apple’s decision to use industry-standard sockets and interfaces, as well as its publication of repair diagrams and instructions. Both moves will allow owners of the ultra-pricey boxes to repair their kit without making an appointment at the Genius Bar.

Apple did lose points for the relatively proprietary nature of its flash storage. While they can be replaced by the end-user, you can’t just swap in a drive from Crucial, as they’re custom-designed for the Mac Pro. You’ve got to procure them straight from Apple, which promises to be an arse-clenchingly expensive ordeal.

iFixit also notes that if you need a replacement part that’s not on Apple’s list for approved repairs, you’ll pay through the nose. That’s certainly something to consider before you drop the equivalent of a two-bedroom terraced house in West Yorkshire on a computer.

This teardown leaves an interesting question: Is this a harbinger of things to come? Canny observers will notice that Microsoft’s newest 15-inch Surface Laptop 3 came with a decent-ish repairability rating.

Are the hardware giants responding to a public backlash against irreparable kit? Or perhaps they were just woken up by the threat of a right-to-repair legislation, dropped in the US this summer.

Maybe. We'd argue it’s more likely they’re trying to keep their big-ticket premium punters happy. It’s those who spend the most money, and those who are most likely to demand the ability to upgrade and repair their pricey kit. ®