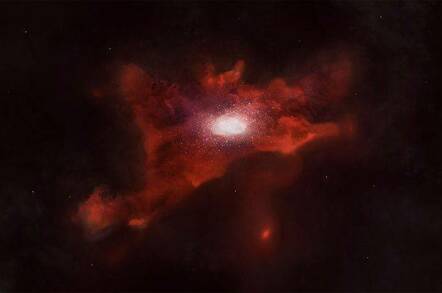 Artist's impression of a galaxy being surrounded by a giant cloud of carbon ions. Image credit: NAOJ

For the first time, astronomers have stumbled across ancient, ginormous clouds of carbon ions, stretching more than 30,000 light-years across and enveloping young galaxies.

The team, led by Seiji Fujimoto, an egghead at Denmark's University of Copenhagen, had no idea these types of structures even existed, since they have not been predicted by theories. It’s well-known that carbon, one of the most important elements for life, is forged from nuclear fusion in stars, though scientists had no idea how it might spread through space.

Now, the discovery of these clouds, some 12.8 billion light years away from Earth, provides the first confirmation of what the team have called “environmental pollution.”

“Supernova explosions at the final stage of stellar life expel heavy elements formed in the stars,” said Rob Ivison, co-author of a study into the formation, published in The Astrophysical Journal on Monday, and director for science at the European Southern Observatory.

“Energetic jets and radiation from supermassive black holes in the centers of the galaxies could also help transport carbon outside of the galaxies and finally to throughout the Universe. We are witnessing this ongoing diffusion process, the earliest environmental pollution in the Universe.”

The boffins spotted the giant collection of charged carbon ions after they analysed data recorded by the Atacama Large Millimeter Array (ALMA) in Chile. “We examined the ALMA Science Archive thoroughly and collected all the data that contain radio signals from carbon ions in galaxies in the early Universe, only one billion years after the Big Bang,” said Fujimoto, the lead author of the research paper.

The radio signals led them to discover the clouds around a cluster of young galaxies still undergoing star formation. The carbon ions surrounding the galaxies aren’t produced from the stars in the galaxies themselves. Instead, the researchers believe they are remnants of the atoms forged from other stars in early galaxies that formed not too long after the Big Bang.

The diffuse swarm of carbon ions surrounds the galaxies like a colossal cocoon that has a radius of more than 30,000 light years. The team aren’t quite sure what powers the cloud, but believes it could be down to surrounding satellite galaxies or from active galactic nuclei ionising carbon atoms and spewing them throughout space. ®