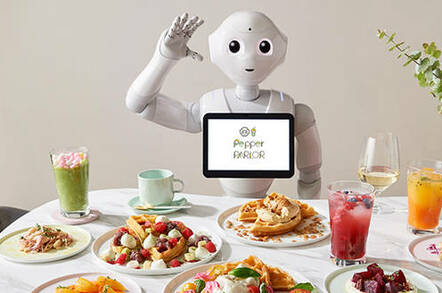 If you thought the service at your local Starbucks was robotic and impersonal, you might want to give Softbank’s newest Tokyo cafe a miss. Working alongside the company’s meatbag workers are a small army of Softbank Robotics’ droids, who’ll help serve and entertain the punters, and will even clean up after them.

The new cafe, called Pepper PARLOR, seats 162 and is located in the Tokyu Plaza Shibuya. As the name suggests, Softbank’s humanoid robot, Pepper, plays a starring role, with ten of these bots spread across the cafe. They take orders, make casual conversation with customers, and will even take your picture.

Announced in 2014, Pepper was pitched as an emotionally intelligent robot, purportedly able to read basic human emotions and respond in kind. In theory, this makes it ideally suited to service industry jobs. Although undeniably a bit of a novelty, SoftBank has sold several thousands of these bots, with the customers including several famous names, like Pizza Hut, and Palo Alto tech retailer B8ta.

Accompanying Pepper is Softbank Robotics’ NAO robots, which perform delicately choreographed dances while you eat. This is the 21st century equivalent of a violinist awkwardly playing while you dine at a retro Italian eatery. Finally, another robot, Whiz, cleans the cafe after hours.

As for food, SoftBank has recruited Fumio Yonezawa, a former New York chef who has created a menu that blends “Gourmet Food and Sweet Waffles from travels around the world.”

It could be pointed out that the main advantage of a cafe staffed entirely by robots is that you don’t have to tip them — but that’s a bit of a moot point, given Japan doesn’t have much of a tipping culture.

This isn’t the first time Japan’s leisure and hospitality space has been invaded by steely hearted, dead eyed machine. Japanese hotel chain HIS Group uses reception and bedside robots in some of its properties. Awkwardly, earlier this year it transpired that these had been hacked, allowing pervs to snoop on unsuspecting guests.

Given you’re unlikely to get your kit off in a cafe, hackers are less of a concern here — so just the inevitable rise of the machines to worry about then.