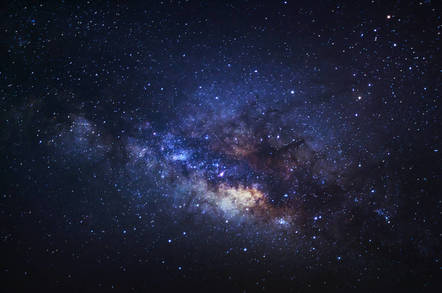 A hundred red objects blinking in and out of existence across Earth’s skies over the past 70 years have left scientists giddy: they believe this could be evidence of previously unseen astronomical phenomena or – and hold tight, now – alien civilizations.

The objects were scrutinized by the Vanishing & Appearing Sources during a Century of Observations (VASCO) project, led by Stockholm University in Sweden, which is on the lookout for the Milky Way’s weirdest events.

Astrophysicists, faced with poring over 600 million objects, whittled down their search to just 100 by focusing on observations of objects in space that simply just disappear, or ones that have rapidly fluctuating brightness levels that vary over a 70-year time period. They hunted for the outliers by comparing data logged in the US Naval Observatory Catalogue (USNO) from the 1950s to the more modern Panoramic Survey Telescope and Rapid Response System (Pan-STARRS) recorded in 2016.

The strangest objects flare up and dim across several orders of magnitude beyond what’s traditionally seen in other types of highly variable objects, like eclipsing binary systems or active galactic nuclei outbursts. And a few seem to have vanished, leaving the researchers puzzled.

Dying stars end their lives slowly, taking millions or billions of years to transition to different evolutionary stages. Rapid changes over 70 years suggest stranger phenomenon not yet fully understood, according to a paper published Thursday in The Astrophysical Journal.

“The implications of finding such objects extend from traditional astrophysics fields to the more exotic searches for evidence of technologically advanced civilizations,” the study’s abstract reads.

VASCO researchers hope to find evidence of things like R Coronae Borealis stars, a rare type of carbon-rich supergiant with brightnesses that can fade up to nine magnitudes over irregular time intervals. Or perhaps, the transient events are failed supernovae.

Failed supernovae are thought to occur when a gigantic stars directly collapse into a black hole without any sort of visible outburst. They have been theoretically predicted, but not yet confirmed.

There might even be wackier explanations for those randomly blinking hundred objects. Current searches for extraterrestrial intelligence have considered interstellar optical laser communication in the infrared range as a potential clue for advanced extraterrestrial civilizations.

"Finding an actually vanishing star - or a star that appears out of nowhere! - would be a precious discovery and certainly would include new astrophysics beyond the one we know of today", said Beatriz Villarroel, VASCO project leader and a researcher at Stockholm University and Instituto de Astrofísica de Canarias, Spain.

Villarroel reckons that the weird objects in the data are “natural, if somewhat extreme astrophysical sources” rather than aliens. Researchers are hoping to publish the images they have collected for the VASCO project as part of a wider citizen science project.

“We hope to get help from the community to look through the images as a part of a citizen science project,” said Lars Mattsson, co-author of the paper and a researcher at Stockholm University. “We are looking at ways to do that right now and that will be something we will be able to talk more about at a later date." ®