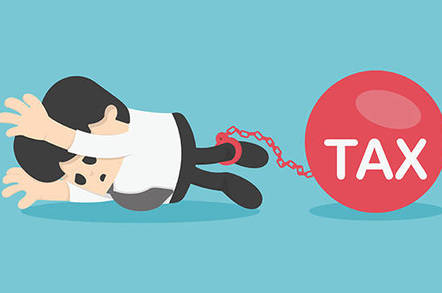 Contractor organisations are insisting the Tory government sticks to promises to revisit IR35 reforms as it emerges that GlaxoSmithKline is ordering contractors to switch to pay as you earn tax arrangements or leave the company.

In an email dated 11 December sent by the pharmaceutical giant to its base of freelancers, GSK warned:

“This decision means that GSK will not extend the contracts of any workers who operate through their own personal services company in the agency worker category beyond March 2020.”

“This change means that those of you who work through a personal services company will have a choice to make over the coming weeks – to move to a PAYE contract and remain working with GSK, or to complete or terminate your existing contract.”

The email was sent to contractors by Lorien – a technology recruitment agency.

Larsen Howie, which got in touch with the Reg about the mail, described the blanket ban as a bad move for contractors and for Glaxo.

The company's head of tax, Andy Vessey, said: "This is a short-sighted, disappointing, and lazy attitude to take. It is similar, however, to HSBC's response to the IR35 reforms that were publicised earlier in the year. HSBC's original communique was also badly worded and one they had to clarify."

Vessey noted that Glaxo risks losing experienced and skilled staff with detailed knowledge of the firm's systems to competitors that are willing to deal with IR35 in a more flexible way.

As it currently stands, from 6 April 2020 the liability for determining a contractor's employment stuatus will switch to the employer, who must decide if off-payroll rules apply to each freelancer.

The rules state that a contractor that performs the same function as a full-time employee must pay similar tax and National Insurance contributions, even though they do not have access to the same benefits such as sick pay or holiday allowance.

Banks have been early movers on IR35, and in addition to HSBC, Barclays and Lloyds have also told contractors they'll be off-payroll workers from April, thereby avoiding liability for a potential bill from HMRC.

With IR35 looming, the decade-long boom in IT contractors in the UK appears to be over. Data from the Office for National Statistics (ONS) showed a 2.4 per cent fall to 121,989 in 2018 compared with the previous year.

Meanwhile contractor groups called on the government to stick to its promises on IR35 reform.

Seb Maley, CEO at Qdos, said: "The government has an opportunity to finally deliver for the self-employed who, after years of neglect, remain sceptical of the Conservative Party's commitment to them.

"The likelihood is, many freelancers and contractors will have voted Conservative based on the party's IR35 promise. The government now has a responsibility to honour its pledge to hold a genuine review of reform."

Julia Kermode, chief executive of The Freelancer & Contractor Services Association (FCSA), said: "With Boris Johnson returning to Number 10 this morning, I would like to remind him and his government that they have promised to review the planned off-payroll reforms... with only just over three months to go before the legislation is due to be rolled out in the private sector, surely that must mean a postponement?"

If they don't delay, then the promise was nothing short of an arrogant and disingenuous move to secure votes. We have also learned today that the budget is now being planned for February/March, which is simply too late for the off-payroll legislation to be properly implemented... If the government wants to avoid utter chaos and shambles, businesses need clarity NOW.

Dave Chaplin, CEO and founder of ContractorCalculator and director of StopThe Off-Payroll Tax campaign, said: "In the run-up to this election we heard a number of political parties pledge to review IR35 and as Boris Johnson re-enters No 10 I would like to remind him of that promise. Having a complex employment status test at the heart of the tax system hasn't worked for 20 years under the intermediaries legislation and hasn't worked under the new rules in the public sector either. The Off-Payroll rules in their current proposed format create an unfairly burdensome scenario which has the potential to poison the entire engagement process between contractor, client and agency.”

The CEO of the Association of Independent Professionals and the Self-Employed (IPSE), Chris Bryce, urged Johnson to provide a "fair deal for freelancers – particularly on IR35".

“We campaigned hard against the disastrous changes to IR35, and we will be holding Chancellor Sajid Javid to his promise to review them.

“The Conservative Party manifesto also pledged to conduct a full review of how government can better support freelancers in areas such as access to finance, making the tax system easier to navigate and better access to broadband. We will ensure this government keeps this promise too.

A GSK spokesperson confirmed to The Reg:

"To ensure we are compliant with the new IR35 legislation, we have decided to engage Agency Workers on a PAYE-only basis from 2020 onwards.

GSK recognises the important contribution these workers make to the company. We are working with hiring managers and recruitment agencies to support our Agency Workers through this change." ®