No box shifting, no Buck Rogers. Bezos-backed Blue Origin blasts off once again

Postcards from the edge... of space? 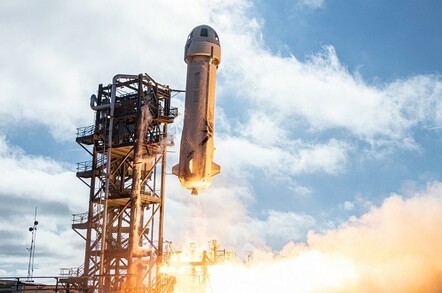 It has been a while but after a hiatus of more than seven months and a weather-induced delay, the rocket outfit bankrolled by billionaire box-flinger Jeff Bezos has sent its New Shepard booster into the blue.

The mission, which lifted off from the company's Texas site at 17:53 UTC on 11 December, marked the 12th test flight overall and the sixth fight of this particular booster. The stumpy thing is built around Blue Origin's BE-3 engine and is designed for reusability, with sub-orbital tourism in mind.

Mission highlights from today. Great day in West Texas. This was the 6th flight for this booster, we flew our 100th commercial customer and took thousands of postcards to space for @clubforfuture #NS12 pic.twitter.com/9vnYUAmlSu

Payloads on board this time included OSCAR, a NASA technology to create useful gasses from common waste, and a collection of postcards created by children. Presumably saying "Sorry we missed you" in preparation for a highly paid future career with the retail giant.

The first New Shepard booster crashed after its maiden test flight in 2015, although the uncrewed capsule it carried made a successful landing. The second booster made five suborbital flights, each ending with a successful vertical landing. The last flight before retirement in 2016 included an ambitious inflight abort demonstration.

The third booster has now achieved a SpaceX-baiting six flights. Blue Origin, which has yet to stick any humans into its capsule, also trumpeted the milestone of its 100th customer on board. Payloads get a few minutes of microgravity before the return trip to Earth.

Orbital flight will have to wait for the hulking New Glenn booster, and its seven-metre fairing, to fire up its seven BE-4 engines at Cape Canaveral's Launch Complex 36 in 2021.

Perhaps more significantly for human spaceflight fans, a spokesperson for the company noted: "This particular rocket has been an operational payload vehicle for several flights, meaning there are no more updates to the system."

As for when a crew might be squeezed into Blue Origin's capsule for a look back at Earth, the company remained tight-lipped. 2019 was mooted as a possibility earlier this year, but 2020 seems a good deal more likely.

Of course, Blue Origin is not the only suborbital game in town for thrill-seekers with deep, deep pockets. Richard Branson's Virgin Galactic should finally begin commercial operations in the coming year or so, and the bearded one was keen to show his company's "spacesuits" last week.

From the skies to the stars – it was wonderful to catch up with Karen Sparrow who joined @VirginAtlantic over 30 years ago and is now bringing @virgingalactic’s spacesuits to life https://t.co/8mYSlGkXd0 #VirginFamily pic.twitter.com/R4ztRB3IFD

Yeah, good luck wearing one of those outside the spacecraft, Dicky. ®