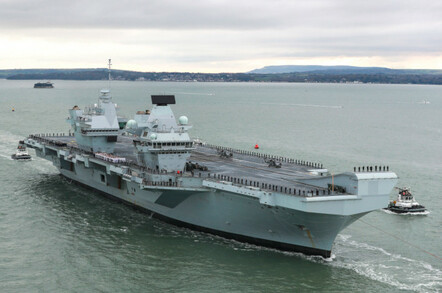 HMS Prince of Wales, second of the Queen Elizabeth-class aircraft carriers, has been commissioned today at Portsmouth Naval Dockyard.

Dignitaries gathered in Portsmouth for the warship’s formal commissioning ceremony, the vessel having been formally handed to the Royal Navy by her builders yesterday.

The Prince of Wales himself, Prince Charles, attended along with Camilla, Duchess of Cornwall.

Captain Darren Houston, HMS Prince of Wales’s first commanding officer, read the commissioning warrant to the ship’s crew in its hangar. Witnessing the ceremony were the First Sea Lord (head of the RN) Admiral Tony Radakin, ambassadors from France and America and also the commander of the US Sixth Fleet, Vice Admiral Lisa Franchetti.

The commissioning of the second QE-class carrier marks the end of the ships’ protracted build period and the start of a new era in British naval aviation. PoW’s sister ship, HMS Queen Elizabeth, is still scheduled to sail into the South China Sea in 2021.

A couple of years ago the RN invited The Register to come and visit the expanse of concrete to which HMS Prince of Wales is now tied. Our invitation to view the actual warship must have got lost in the post.

According to the Navy, about 550 VIP guests along with 1,400 family and friends of the ship’s company, joined the crew for the ceremony. The latter group included guests with connections to the previous HMS Prince of Wales, a King George V-class battleship sunk on this day in 1941 by Japanese forces – in the South China Sea.

The old PoW was sent by British admirals into an area of the South China Sea without adequate air cover, along with battlecruiser HMS Repulse. At the time the British hadn’t realised that surface ships were very vulnerable to air attack from large numbers of modern, fast aircraft. Both capital ships were sunk by massed Japanese air attacks. PoW sank at 1:20pm, taking 327 of her crew down with her – including her captain and the admiral commanding the task force.

Her bell was later recovered from the wreck site, which has since been damaged by scrap metal thieves searching for valuable pre-atomic-bomb steel. The bell was displayed aboard the new aircraft carrier today, as a mark of respect to the new ship’s predecessor and her crew. ®