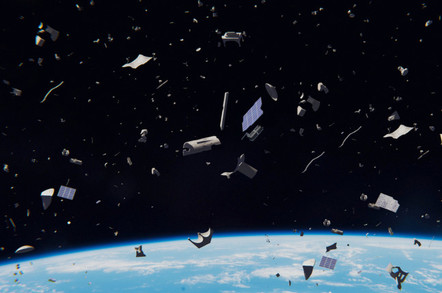 The European Space Agency (ESA) has commissioned a mission to remove an item of debris from orbit as the space around Earth gets progressively more cluttered.

Trumpeting a "world's first", ESA is procuring the mission as a service contract from a consortium led by Swiss startup ClearSpace. Launch is planned for 2025 and the project is due to start in March. The plan will see the capture of a Vega Secondary Payload Adaptor (VESPA) upper stage left in an 800km by 660km orbit by the second flight of ESA's Vega launcher in 2013.

The derelict object weighs in at 100kg, so is roughly representative of a small satellite. The ClearSpace-1 spacecraft, equipped with four robotic arms to grapple debris, will be launched to a 500km orbit for commissioning before heading to VESPA for rendezvous and a destructive de-orbit.

If all goes well with the relatively simple VESPA, then more complex captures will be attempted.

World's first though? The Space Shuttle famously captured the odd busted satellite back in the day (before NASA decided it wasn't worth the risk), but was hardly autonomous, and as recently as October this year, SpaceLogistics' Mission Extension Vehicle (MEV-1) was launched on a Proton to rendezvous with IntelSat 901.

There have been a few concerns raised that MEV-1 might be having some problems but a Northrop Grumman spokesperson assured us that "MEV-1 continues to perform nominally. We continue to perform orbit raising and testing per our mission plan."

And ESA itself has flirted with the debris clearance idea previously. For example, the agency began developing the e.Deorbit mission in 2013 to take down a derelict satellite before widening the scope of the project to include refuelling, reboosting and refurbishing spacecraft.

Regular readers might also remember the RemoveDEBRIS mission, led by the UK's University of Surrey, which was released from the International Space Station (ISS) last year and successfully demonstrated three technologies for orbital housekeeping: a net, a harpoon and LiDAR to measure the distance, speed and direction of debris.

"We brought our own debris," a spokesperson for the RemoveDEBRIS mission told The Register by way of explanation before remarking that the "world's first" of the ESA mission was most likely the method of capture – those four robotic arms, but added "we've got our fingers crossed for them."

Debris in orbit is a hazard that is likely to increase thanks in part to plans by the likes of SpaceX to send hundreds, or even thousands, of satellites into space as well as sabre-rattling by some of the world's superpowers blowing redundant spacecraft to smithereens... lots of fast moving smithereens. In a variety of exciting orbits.

While some vendors, such as Rocket Lab, have taken the responsible line that "no part of the rocket" is left in space, a failed satellite cannot simply be deorbited. And other launchers from years gone by have been a little less careful, like ESA's VESPA.

The RemoveDEBRIS spacecraft itself remains in orbit, although is expected to re-enter the Earth's atmosphere in the next 12 to 18 months. ®