Plus: Commercial crew news and NASA publishes what ISRO won't 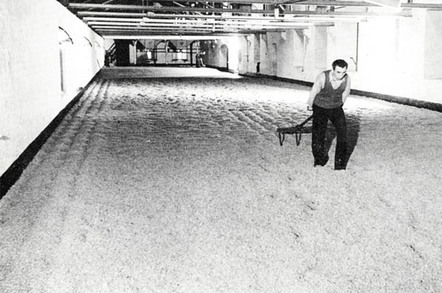 Shot of the interior of the next ISS module?

Round Up SpaceX landed another Falcon 9, Rocket Lab took a first step toward reuse, and it was handbags at dawn for lunar boffins in this week's curation of all things space.

SpaceX sends a malting kit to the ISS, sadly not for thirsty 'nauts

After a delay caused by pesky upper-altitude winds, SpaceX successfully launched the CRS-19 mission to the International Space Station at 17:29 UTC on 5 December. The uncrewed Dragon freighter, on its third mission to the ISS, was grappled by hardworking astronauts Luca Parmitano of ESA and NASA's Andrew Morgan at 10:05 UTC on 8 December.

The Dragon, which had been used on the CRS-6 and CRS-11 missions previously, contained 2,617 kg of pressurised cargo (including 977 kg of science) and 924 of unpressurised payload, carried in the "trunk" of the spacecraft.

Highlights onboard include gear to test an automated malting procedure to compare malt produced in space with that on Earth for genetic and structural changes. Boffins insist that the microgravity research will help in assessing the stuff for nutritional use on long duration spaceflights.

We at El Reg would obviously suggest an alternative use.

The first stage of the booster, on its maiden flight, performed the crowd pleasing stunt of landing aboard a drone ship stationed in the Atlantic. The mission itself was the second to the last flight of the CRS-1 contract.

The Dragon is scheduled to splashdown in the Pacific Ocean in January 2020, carrying 1,633 kg of payload back from the ISS.

SpaceX and Boeing name the dates

There were updates aplenty last week as SpaceX and Boeing neared the dates of their next demonstrations of astro-jalopies ahead of actually sticking humans into the things.

Boeing is due to send its CST-100 Starliner on an uncrewed mission to the ISS on 20 December, while SpaceX will be showing off an inflight abort of a Crew Dragon spacecraft on 4 January.

Should all go to plan, rocket fans are in for a treat.

Boeing, with the Starliner capsule perched atop an Atlas V, performed the programme's first Integrated Day Of Launch (IDOLT) test last week, which involved pretty much everything up to actually pressing the Go button, including filling the booster with Liquid Oxygen and rocket-grade Kerosene.

While the Orbital Flight Test (OFT) will not include a crew, the trio of 'nauts slated to take the first crewed jaunt aboard the CST-100, Boeing astro Chris Ferguson and NASA astronauts Mike Fincke and Nicole Mann, looked on from control centres.

SpaceX has, of course, already sent an uncrewed version of its Crew Dragon to the ISS and looked to be running ahead of Boeing in the commercial crew stakes before blowing its own capsule to bits during a ground test. While Boeing will not be demonstrating its own capsule surviving a failing Atlas V, SpaceX will be showing off the Crew Dragon departing a Falcon 9 in a simulated emergency. The Falcon 9 is not likely to survive the experience.

Should testing go well, the stage will be set in 2020 for crews to once more launch from US soil, nearly a decade after the last Space Shuttle left the launchpad.

After a delay to deal with a baulky stage 2 umbilical, smallsat flingers Rocket Lab beat the weather to launch its tenth Electron mission: "Running Out Of Fingers", although "Keeping Fingers Crossed" might have been a better name as ground winds threatened to cause another scrub.

The Electron left the company's Māhia Peninsula Launch Complex at 08:18 UTC on 6 December 2019. As well as the seven satellites onboard (including one to simulate an artificial meteor show) the mission was also a first test of technology that will eventually be used to recover the Electron booster for reuse.

Additional onboard gear reoriented the first stage 180 degrees for its descent, and maintained the angle of attack as the stage was slowed to less than 900 km per hour before smacking into the sea as planned.

Next year will see parachutes fitted as the company attempts a recovery via helicopter.

Rocket Lab boss, Peter Beck, was chuffed to notch up another win and noted that the recovery attempt went "better than expected."

All payloads deployed, 100% mission success! Stage 1 Recovery was better than expected. More on that soon.

A spokesperson for the company told The Register the gang is "working on getting some video" of the descent to impact, with something expected in the next few days.

NASA demonstrated that it can more than match industry upstart SpaceX when it comes to destroying test articles after pushing a test version of the Space Launch System's (SLS) liquid hydrogen tank quite some way beyond the loads expected in-flight.

Our final objective for the test version of the @NASA_SLS liquid hydrogen tank? Push it until it broke.

In fact, the tank stood up to loads of more than 260 per cent over five hours before the poor thing buckled and ruptured.

The test-to-failure was conducted using gaseous nitrogen for pressurisation and hydraulics to simulate the load. This final test, the largest ever of NASA rocket stage pressurised tank, occurred in the 65 metre tall test stand at the agency's Marshall Space Flight Center in Huntsville, Alabama. Hydraulic pistons were used to deliver the millions of pounds of compression, tension, and bending forces on the unfortunate article.

As it happened, the buckling failure occurred in the same relative location predicted by the Boeing team and within three per cent of the predicted failure load.

The test comes a month after four RS-25 engines were attached to the base of the core stage that will launch as Artemis 1. A test run of that stage is planned for next year ahead of its shipment to Kennedy Space Center and, at long last, actually launching.

They seek it here, they seek it there, but there are bits of Vikram everywhere

The wreckage of India's Moon lander, Vikram, has been discovered by an Indian boffin by scouring shots taken by NASA's Lunar Reconnaissance Orbiter (LRO) after the spacecraft went silent just before a planned touchdown on 7 September.

The #Chandrayaan2 Vikram lander has been found by our @NASAMoon mission, the Lunar Reconnaissance Orbiter. See the first mosaic of the impact site https://t.co/GA3JspCNuh pic.twitter.com/jaW5a63sAf

The LRO team released its first mosaic image of the site on 26 Sept and was swiftly contacted by Shanmuga Subramanian with a positive identification of debris.

Shanmuga spotted the first debris 750 metres northwest of the main crash site, and a subsequent mosaic put together by the LRO team in November showed the clearest imagery of the impact crater, ray and debris field.

The Indian space agency, ISRO reacted somewhat snottily to the discovery of its shattered lander, pointing out that the discovery was old news since its Chandrayaan-2 orbiter had already spotted the poor thing.

Far it be it from us to criticise, but while ISRO has been cheerfully boasting about the orbital mission, and showing off snaps taken by Chandrayaan-2, it has neglected to share any of Vikram.

It was left to Shanmuga (and NASA) to do that. ®