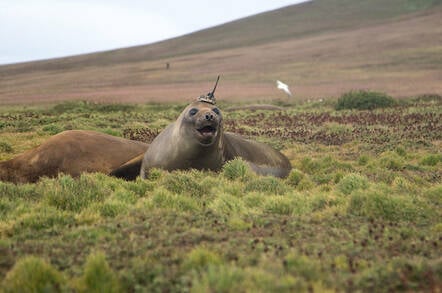 NASA’s science team has a new female recruit and she's probing the watery depths of the Antarctic in a quest to help climate eggheads understand our climate.

Armed with no prior research or any academic qualifications, just a metallic antenna strapped to its head, a southern elephant seal has been quietly helping scientists gather data in one of the world's most challenging environments.

NASA researchers aren’t cut out to battle the ocean around Antarctica, filled with wild freezing currents that produce eddies that stretch just over 200 kilometers (125 miles) across. They are trying to study the Antarctic Circumpolar Current, which flows in a loop around Antarctica through the Atlantic, Pacific and Indian oceans, but deep diving there is near impossible.

Southern elephant seals, however, thrive under those conditions and spend most of the year at sea. Such seals dive deeper than many whales, with one tracked going down 2,133 meters (6,998ft) down in search of squid and fish, making them the top diver among different types of seal.

So a female specimen was captured and tagged with a sensor resembling a teeny metallic hat that measures the temperature, conductivity and pressure of water in the Kerguelen area, a remote region in the Southern Indian Ocean.

After the seal swam 5,665 kilometers (3,250 miles) and dove up to 1,000 meters 6,942 times over the course of three months, diving around 80 times a day. Scientists collected the water data logged by the seal's little hat and it was correlated with a satellite tracker.

The results published in a paper in Nature Geoscience show that the smaller eddies or fronts measuring less than 20 kilometers across drive more heat upwards from the ocean to the surface rather than transporting downwards.

“Most current modeling studies indicate that the heat would move from the surface to the ocean interior in these cases, but with the new observational data provided by the seal, we found that that's not the case," Lia Siegelman, a visiting grad student working at NASA's Jet Propulsion Laboratory, said.

NASA hopes that by studying these processes, it’ll be able to better understand how much heat the ocean can absorb from the Sun. “Inaccurate representation of these small-scale fronts could considerably underestimate the amount of heat transferred from the ocean interior back to the surface and, as a consequence, potentially overestimate the amount of heat the ocean can absorb," she added.

"This could be an important implication for our climate and the ocean's role in offsetting the effects of global warming by absorbing most of the heat."

The team believes that the same effects are happening in other parts of the ocean too, including the Atlantic and the North Pacific. “I hope this [result] will encourage physicists and biologists to use those very rich data from seals," Siegelman said. ®