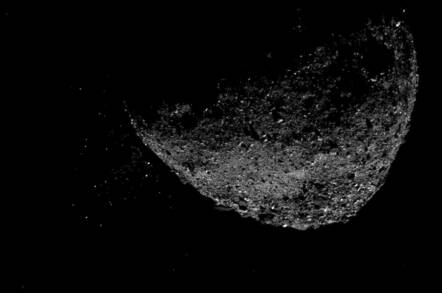 An image of Bennu emitting particles made up of two composite exposures taken by the NavCam 1 imager on the OSIRIS-REx spacecraft. Image credit: NASA/Goddard/University of Arizona/Lockheed Martin

Pic A closeup image of Bennu snapped by NASA's OSIRIS-REx spacecraft reveals that the asteroid's surface is surprisingly volatile, randomly spitting out shards of debris into space.

"Among Bennu's many surprises, the particle ejections sparked our curiosity, and we've spent the last several months investigating this mystery," said Dante Lauretta, the principal investigator of the OSIRIS-REx mission and professor of planetary science and cosmochemistry at the University of Arizona. "This is a great opportunity to expand our knowledge of how asteroids behave."

Launched in 2016, the OSIRIS-REx spacecraft eventually flew close enough to enter into an orbit around Bennu in late 2018. By the start of 2019, its navigation cameras captured tantalizing images of a particle ejection event for the first time. The results were published in Science on Thursday.

At first the researchers thought the bright flecks of light were stars in the background, but after they monitored the asteroid in more detail they realized that they were pieces of dust and rock, measuring up to 10cm across, being spewed from Bennu's surface. The events occur pretty frequently, with the largest ones detected twice in January and once in February this year, where up to 200 bits of debris were released.

The particles were flung out at a maximum speed of three meters per second from different regions of the asteroid; they either ended up in orbit around the asteroid, crashed back down onto its surface, or floated away into space.

The researchers aren't quite sure what's triggering these particle ejection events. They believe it could be down to meteoroid impacts, thermal stress fracturing, or the release of water vapor.

Located in between Earth and Mars, Bennu lies within a region where meteoroid impacts are common. If these small rocks struck the asteroid, it's possible that the crash might dislodge particles off Bennu's surface.

Or it may be down to thermal fracturing. The largest particle ejection events all occurred when Bennu was warmed up by the Sun's rays. In the shadows, temperatures plummet. The change in temperature could be damaging the rocks on the asteroid's surface, causing them to crack and break away.

The third option is due to Bennu's water content. Maybe the water locked up in the clay it contains evaporates and is released as water vapor when it's baked during the asteroid's afternoon.

"It could be that more than one of these possible mechanisms are at play," said Steve Chesley, co-author paper and a senior research scientist at NASA's Jet Propulsion Laboratory. "For example, thermal fracturing could be chopping the surface material into small pieces, making it far easier for meteoroid impacts to launch pebbles into space."

The researchers hope they'll piece together the source of Bennu's eruptions when OSIRIS-REx collects a sample of the asteroid in 2020 and delivers it back to Earth in 2023. ®