Comms provider switched 118 people to its services without their consent 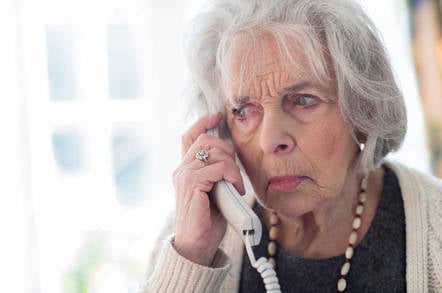 Updated Imagine a telco kicking down your front door, yelling "all your bills are belong to us" then leaving. In the industry parlance, it's known as "slamming" and Ofcom has fined Onestream £35,000 for the practice.

An investigation by the UK comms regulator found that the Hampshire-based broadband and landline minnow, launched 2018, had taken over the telephone services of more than a hundred customers without their consent between 13 April 2018 and 25 January 2019. The watchdog's ruling said Onestream went about this a couple of ways by:

To make matters worse, Ofcom said that three-quarters of those "slammed" were "elderly or vulnerable".

This aggressive form of mis-selling was found to be in direct contravention of Ofcom's General Condition C7.3(a) [PDF], which regulates how customers switch between telecoms providers. The section basically says: "Yeah, slamming? The act of switching someone from one company to another without their permission? Do not do this."

Thus Ofcom saw fit to level a penalty of £35,000 at Onestream, discounted 30 per cent because the firm held its hands up and said soz. The fine is minuscule compared to the £300,000 Ofcom smacked Kent-based True Telecom for in 2017, but the regulator said this was the most severe penalty it could impose – 10 per cent of the company's turnover.

It added: "Had Onestream been a bigger company with a higher turnover, the penalty could have been set at a higher level."

Onestream is now required to release all affected customers from their contracts free of charge and refund the early termination fees of those who had already switched away from its services.

The company has also written to all customers who switched as a result of a cold call, informing them that they can quit their contract without penalty whenever they like.

The money, due within 20 working days, goes to the Treasury. ®

A spokesperson for Onestream has been in touch to say it has introduced "safeguards throughout the business, ensuring there can be no repetition of the mistakes that were made."

"Proven and respected industry professionals now hold key positions within the Onestream organisation who, working closely with independent consultants have revised all processes and implemented best practice to achieve positive change," she added.

"All affected customers have been fully compensated, released from all and any contractual obligation and have received a full and unreserved apology."