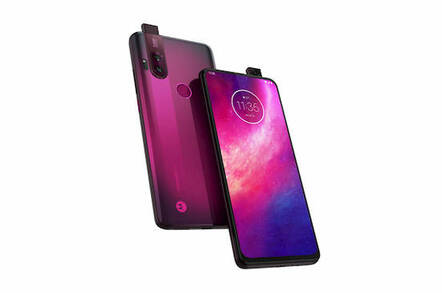 Motorola has updated its mid-range lineup with the announcement of the Android 10-powered One Hyper.

This handset is notable for several reasons, including the addition of a 64MP rear-facing camera, as well as a 32MP pop-up selfie shooter. The latter is similar to that on the Honor 9X, which we reviewed earlier this year.

The handset uses a relatively power-conscious Qualcomm Snapdragon 675 platform, which, although not much of a speed demon, promises decent battery performance. Motorola claims users can get 38 hours of usage from a single charge, which is fairly impressive. And with 45W "hyper charging", it shouldn't take long to replenish the device from empty.

Weirdly, though, it comes with a normal 18W charger, according to PC Mag. If you're going to take advantage of the fast-charging feature, you'll have to buy your own.

Punters get a generous 128GB of storage to play with, although the Motorola One Hyper is somewhat lacking in the RAM department, shipping with just 4GB of memory. It also packs a 6.5-inch FHD+ display, with a screen-to-body ratio of 90 per cent. This is largely thanks to the device's tiny bezels and absence of an unsightly notch.

As for the camera department, the 64MP rear shooter is accompanied by an 8MP ultra-wide lens, which should allow you to get decent panoramic and outdoor shots. The absence of a telephoto lens is somewhat of a bummer, however.

Both the front and rear cameras have a high megapixel count and use pixel-binning technology to improve low-light performance. This is where several small pixels are combined into a larger one. This approach is employed on devices from a variety of manufacturers, including OPPO and Xiaomi.

In what we assume is solely for marketing reasons, Motorola calls this "Quad Pixel" technology, rather than using the standard etymology. And while the desire for manufacturers to stand out from their competition is understandable, it is rather irksome when tech companies make up terms.

The phone supports NFC, Bluetooth 5, Wi-Fi 802.11ac and, for fans of old-school headphones, or non-fans with a several drawers-ful of them, comes with a standard 3.5mm jack.

The Motorola One Hyper is available to purchase now in the US, where it retails at $399 (roughly £300) unlocked. Punters can grab it on the company's official website in blue, red, and purple variants. ®