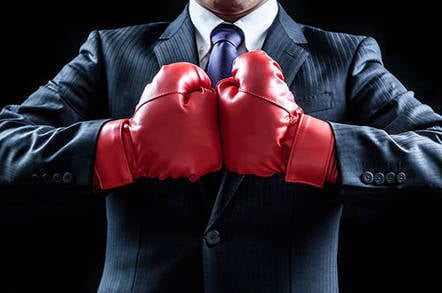 Corporate raider Carl Icahn isn't quietly accepting HP's rejection of Xerox's hostile $33.5bn takeover bid – he has accused the board of using delay tactics to keep their jobs and warning it can be done in a nice or not-so-nice way.

HP and Xerox began private talks in the summer and Xerox's offer was made public in early November. The PC and printer slinger spurned Xerox's advances, saying the price tag of $17bn in cash and 0.137 XRX shares for each HP share undervalued the business. HP's board also said it believed in its own company strategy and didn't need Xerox.

Reservations voiced by HP include the Connecticut print giant's future prospects, given the $1bn sales shrinkage (on a trailing 12-month basis since June 2018), and the impact of "outsized debt levels" on the combined organisation's stock. HP had a market cap three times the size of Xerox at $27.27bn when the bid became known.

The tit-for-tat exchanges continued with Xerox threatening a hostile takeover, HP again saying none of its questions had been answered and then Xerox last week telling HP's board it will bypass them and go direct to shareholders to seek approval. The gloves are well and truly off.

Weighing in on team Xerox, Icahn – who owns 10.85 per cent of Xerox Holdings Corporation stock and 4.24 per cent of HP stock – has written an open letter to HP's board to back mutual due diligence talks, asking: "What is the downside?"

He added in the letter: "Because I see no other plausible explanation for HP to refuse to engage in a customary mutual due diligence, I am left to wonder whether this is simply a delay tactic aimed at attempting to preserve the lucrative positions of the CEO and members of the board, which they fear might be affected if a combination does take place.

"While this might sound cynical, over the last several decades as an activist I have made billions and billions of dollars not only for Icahn Enterprise but for all shareholders by standing up to managements and boards that have refused to do anything that would change the status quo, which might mean threatening their huge incomes. While there are many good and caring boards, there are also many terrible ones that have cost shareholders dearly by failing to act in their best interests, as HP's board and management seem to be doing now."

HP Inc CEO Enrique Lores, a multi-decade veteran of the company, started in the job at the start of November when his predecessor Dion Weisler left for personal reasons related to a family health matter. The Palo Alto firm has had a tough year and recently pushed through a restructure. It also rewrote its print strategy – for the division where most of its profits were historically made. The company has, however, continued to do well in the PC market on the Windows 10 refresh, second only to Lenovo in the global market.

Icahn added in his acidic open letter that HP's restructure "seems to amount to little more than rearranging the deck chairs on the Titanic".

"The road to the graveyard on Wall Street is littered with the bones of companies, such as Eastman Kodak, which wasted a great deal of valuable time coming up with one ill-fated plan after another and also failed to act decisively when transformative opportunities presented themselves. It is absurd for the HP board and management team, with such a history of underperformance and missteps, to claim to have had a sudden epiphany and now expect shareholders to trust them to execute a standalone restructuring plan rather than to even explore an opportunity to enter into a combination that could bring about a much needed $2+ billion of cost synergies and possibly save the company."

The corporate raider, who has been involved in multiple battles with senior management at tech firms (including, in recent years, Dell and getting the CEO changed at Xerox), said his "strong preference" is to avoid nastiness and the "expense and distraction that conflict brings".

However, we sometimes do encounter decision-making, such as that which seems to be occurring now at HP, that is irrational and not in the best interest of shareholders and are thus forced to take action to protect the value of our investments.

He then reiterated what he said just after the talks between Xerox and HP were made public, that a merger is a "no-brainer".

"I implore all HP shareholders who agree with me to reach out to HP's director to let then know that immediate action is necessary to explore this opportunity NOW."

Icahn't let you do this: Stock botherer fires off sueball to scupper Dell's 'coercive' deal

Icahn to Dell investors: You can't touch this DVMT offer

Me? Single biggest shareholder? Kneel before my portfolio

Carl Icahn: Will someone rid my portfolio of this rotten Apple?

Windows! Icahn! Taxes! It's all on Vulture Central's news round-up

Vid Regina Eggbert takes you through top stories of the week