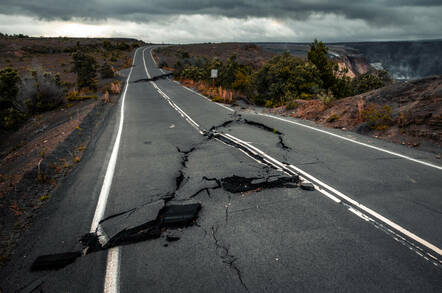 The technology to do this, known as distributed acoustic sensing (DAS), has been steadily improving over the last few years, according to a study published Wednesday in Seismological Research Letters.

“With DAS, the hair-thin glass fibers themselves are the sensors,” the paper’s abstract reads.

Fiber optic cables contain naturally occurring microscopic flaws, and these imperfections can be harnessed as seismic sensors. Laser pulses are sent along the fiber cabling, and scatter when they encounter these tiny cracks or faults in the cabling. The intensity of this echoing laser light is measured.

Then when earthquakes, tremors and other seismic activity shifts the cables, the small imperfections are disturbed. This causes the laser pulse echoes to change slightly, and these changes can be used to detect movement in the earth.

DAS is already being used in the real world. Zhongwen Zhan, author of the paper and an assistant professor of geophysics at the California Institute of Technology, used fiber optic cables in the US state to study aftershock patterns from a series of earthquakes that struck Ridgecrest, a town over 150 miles from Los Angeles, in July earlier this year.

“We turned about 50 kilometers of cable into more than 6,000 sensors in three days," Zhan said.

The oil and gas industry is also using DAS to measure changes in oil fields during hydraulic fracturing or fracking, when pressurized liquid is pumped underground. Fiber optic cables are fed into boreholes to monitor seismic activity.

The researchers found that cables currently only have a range of about ten to 20 kilometers when using this DAS technique, so the fiber optic cables have to be laid pretty close to the source of the rumblings in order to detect them.

“I know there is ongoing research hoping to extend the range beyond 100 kilometers using different ideas. But I’m not sure which idea would work best and how well they would work yet,” Zhan told The Register.

By extending the range, fiber optic cables on the ocean floor could be used to study tsunamis. The boffins believe DAS may even work in environments like Antarctica or even the Moon.

"You can imagine that on the moon or some other planet, with a high radiation or high temperature scenario, the electronics might not survive that long in that environment," Zhan said. "But fiber can."

DAS is still in its infancy, however, and the academics don’t quite understand some aspects of the technology. Each sensor contains “self-noise,” or background seismic signals that can interfere with earthquake readings. Scientists aren’t quite sure what is causing the noise; it might be from the laser or the cable itself.

“We simply have not done enough experiments with different controlling factors changing things like the cable type, installation, instruments, or temperature control,” he concluded. ®