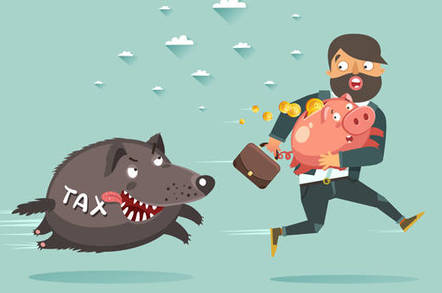 On Monday, the non-profit group said it plans to release a report this week titled, "The Silicon Six and their $100 billion global tax gap," which shows that the six tech companies have underpaid their tax obligations from 2010 through 2018 based on statutory tax rates.

"Our analysis of the long-run effective tax rate of the Silicon Valley Six over the decade to date has found that there is a significant difference between the cash taxes paid and both the headline rate of tax and, more significantly, the reported current tax provisions," said Paul Monaghan, chief executive of Fair Tax Mark, in a statement. "We conclude that the corporation tax paid has been much lower than is commonly understood."

The groups says most of the shortfall can be attributed to the use of tax havens like Bermuda, Ireland, Luxembourg and the Netherlands.

Amazon, the group claims, is the worst tax shirker, having paid just $3.4bn in income taxes over the past decade. That works out to 12.7 per cent of profits, about a third of the usual US federal tax rate of 35 per cent.

That's less than a tenth of what Microsoft paid in income tax during the same period, $46.9bn, even through Amazon's revenue during the decade exceeded Microsoft's by about $80bn.

In a statement emailed to The Register, Amazon disputed Fair Tax Mark's claims.

"These suggestions are wrong," an Amazon spokesperson said. "Amazon represents about 1 per cent of global retail with larger competitors everywhere we operate, and had a 24 per cent effective tax rate on profits from 2010-2018 – neither 'dominant' nor 'untaxed.' Amazon is primarily a retailer where profit margins are low, so comparisons to technology companies with operating profit margins of closer to 50 per cent is not rational."

"Governments write the tax laws and Amazon is doing the very thing they encourage companies to do – paying all taxes due while also investing many billions in creating jobs and infrastructure. Coupled with low margins, this investment will naturally result in a lower cash tax rate."

Fair Tax Mark ranked Facebook as the second worst tax dodger, noting that the social ad biz paid just 10.2 per cent of profits. Facebook did not respond to a request for comment.

Google, at number three, paid just 15.8 per cent of profits, the same rate paid by Netflix, the advocacy group said.

Apple, the self-described world's largest tax payer, paid 93.8bn in income taxes during the period, amounting to just 17.1 per cent of profit or 8.9 per cent of foreign profit, Fair Tax Mark said.

Microsoft, the report states, had the least aggressive tax avoidance posture, paying $46.9bn in income taxes on profits of $278.5bn and revenue of $882.5bn. In terms of tax paid as a percentage of profit, that's still just 16.8 per cent.

"Fair Tax Mark's interpretation of how we pay tax ignores the reality of today's complicated international tax system, and distorts the facts documented in our regulatory filings," said Castaneda in an emailed statement.

"Like other multinational companies, we pay the vast majority - more than 80 per cent – of our corporate income tax in our home country. As we have said before, we strongly support the OECD’s work to end the current uncertainty and develop new tax principles."

In an effort to deal with longstanding concerns about corporate tax avoidance, the OECD (Organization for Economic Cooperation and Development) in October proposed a framework to revise how large multinational corporations get taxed.

US Congressional representatives from the House and Senate have expressed support for engaging with the OECD to resolve the quandary of how to tax large firms in the digital age.

The Heritage Foundation, a pro-business conservative think tank, opposes the idea because it might lead to businesses paying more taxes, which is exactly the issue. ®

What a re-leaf: IBM's AI smarts to tell 'leccy companies when their bushes need trimming

Holster the chainsaw, Big Blue kit designed to know if tree's a crowd for overhead cables