Getting giddy over CI/CD with Anthos and Kubernetes 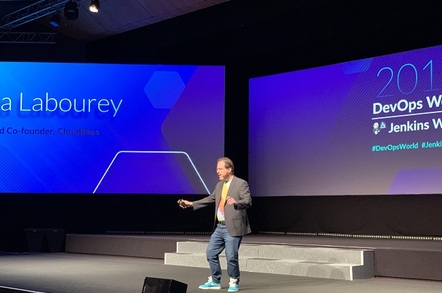 Famed for the venerable Jenkins pipeline wrangler, CloudBees unveiled the open-source Jenkins X in 2018 and, recognising that setting the thing up can be a faff (and eyeing the subscription models that have tempted its contemporaries), the company has opened up a preview programme for developers who prefer something a little more managed.

A GUI for the cloud-native toolset also put in an appearance during last month's KubeCon in San Diego.

While Jenkins has thrived (and occasionally become nearasdammit impossible to manage) thanks to a vast ecosystem of plugins, Jenkins X (part of the Continuous Delivery Foundation) is aimed squarely at Continuous Integration and Continuous Delivery (CI/CD) in a cloud-native world of Kubernetes.

The choice of SaaS host is, unsurprisingly given CloudBees' relationship with the ad slinger, Google Cloud Platform. The CI/CD vendor was a launch partner for the Google Cloud Run compute platform last month, and the GCP marketplace is festooned with the company's products, including CloudBees Core and the CloudBees Jenkins Distribution.

A pivot by the Jenkins X team to the open-source, Kubernetes-native framework Tekton (also part of the CDF) was also likely a factor.

An ebullient James Strachan, distinguished engineer at CloudBees and unabashed Jenkins X enthusiast, highlighted the benefits that the likes of Google Anthos would bring to users. He told The Register that Google's take on a hybrid cloud would allow customers to bring up Jenkins X namespaces pretty much anywhere – in the public cloud, on premises and so on, all under the veneer of SaaS.

CEO Sacha Labourey agreed, telling us: "With Anthos, you need to be able to push workloads from on-prem to the public cloud. With SaaS you need to mix and match," before adding modestly, "which is what Jenkins does extremely well."

Noting that Kubernetes was "both powerful but also pretty complicated", Labourey explained the aim was "to have an abstraction layer on top of Kubernetes", saving developers the effort of setting things up and managing the infrastructure SaaS-style. For a fee, of course.

That fee is very much TBA at present and the project will be in preview for a fair few months. Labourey reckoned that the product would hit General Availability "mid next year". As for cost, "it's always a subscription model," he observed, with the main question being "how far do we go with a freemium?"

Jenkins X remains open source, although the CloudBees CEO cautioned: "We obviously have some integration pieces that are not open source."

Labourey attributed the "very open and welcoming stance on working with us" as a factor in selecting GCP, "maybe more than others," he added, in reference to cloud giants with their own investments in CI/CD technology. However, he acknowledged that the company was aware of a need "to be on each and every platform".

As for the increasingly long-in-the-tooth Jenkins, Labourey said: "Jenkins is here to say," adding that the platform was running 10 per cent more builds since San Francisco's Jenkins World. On following Jenkins X into the SaaS world, Labourey told us: "We've done Jenkins as a SaaS in the past. The problem is that Jenkins has so many plugins..." which makes support a tad tricky.

"So we need to find the right balance between standardisation, which can be 'SaaSified', versus what's more custom.

"I wouldn't want to do a supported version of Jenkins as SaaS for free either," he added. ®