Escobar Fold 1 snort all it's cracked up to be: Readers finger similarity to slated Chinese mobe 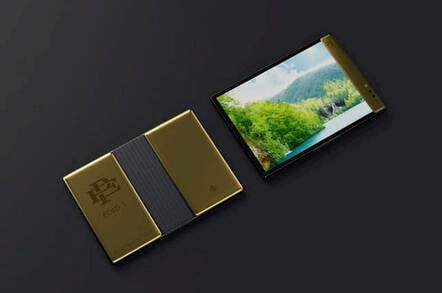 So, as reported yesterday, the younger brother of Colombia's favourite son Pablo Escobar plans to launch a foldable phone, the Escobar Fold 1. Alarm bells started ringing, not least because the entry-level model has an MSRP of $349 – about $1,000 less than what you'd expect.

Here's another reason to be cautious, as spotted by our dear readers: the Escobar Fold 1 looks very much like a rebranded version of 2018's Royole Flexpai.

The listed specifications of the Escobar Fold 1 are a carbon copy of the Flexpai's, down to the RAM and camera. Moreover, when you look past the gaudy gold trim, the two phones share a passing resemblance.

The Royole Flexpai was dubbed the world's first foldable phone. Although it didn't see much of an international release outside China (save for the developer edition), the Western tech media got their grubby mitts on the device, and the reviews were almost universally damning.

Trusted Reviews asked if it was a "foldable flop". Vlad Savov, never one to mince his words, described it as "charmingly awful".

This leaves one big question: how is Escobar Inc selling the Escobar Fold 1 so cheaply?

Royole reportedly sold the FlexPai in China for ¥8,999. At the time, that was roughly $1,320 – or nearly a grand more than Escobar is selling the Fold 1 for. Now, phones depreciate in value over time, but not by that much.

Other publications quote Escobar Inc as explaining the bargain price tag of the Escobar Fold 1 on the fact that the company is selling the device itself, thereby cutting out the middleman. Again, that doesn't account for a nearly $1,000 discrepancy.

We've reached out to Escobar Inc for clarification. If we hear back, and nobody kills us for asking too many questions, we'll update this article. ®