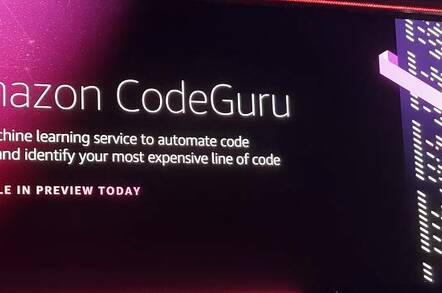 “This is not a sales and marketing conference” said Jassy; but it is, at least in part. Jassy’s goal is to sustain the narrative that only AWS does cloud properly, and each year he seems to spend a little more of his time saying that his cloud has more market share or more resilience or better performance than, you know, those other clouds.

He referenced a Gartner IaaS market share report showing AWS with a 47.8 per cent slice, versus Microsoft at 15.5 per cent and Google at 4 per cent - figures dating from July 2019.

Jassy urged the re:Invent crowd to get off Oracle and to retire IBM mainframes – “Companies are trying to move away from mainframes as quickly as they can,” he said – but he reserved his sharpest barbs for Microsoft.

“People are trying to get away from SQL Server,” he claimed, complaining particularly about Redmond's licensing changes which remove license mobility from public cloud providers.

“People are sick and tired of being pawns in this game,” he said. Shortly after, in front of a slide saying “Closing Windows,” he again referenced adverse license changes, and pointed the 65,000 re:Invent attendees towards Linux. 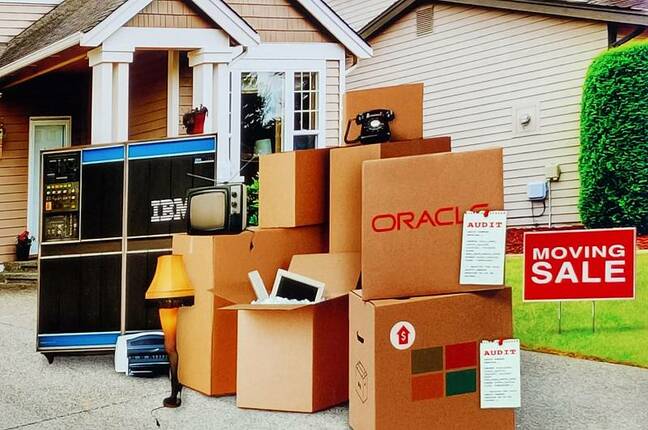 Things to leave behind in moving to the cloud, according to AWS CEO Andy Jassy (Slide from Re:Invent keynote)

Leaving these industry fun and games aside, Jassy went on to make numerous announcements.

Not a big announcement; and perhaps the main point of interest here is that AWS is unwilling to let go of its own non-K8s ECS. Jassy said that AWS likes to be able to “control the development of ECS,” versus the open source K8s, and that this enables it to integrate more easily with other AWS services. The snag here is that K8s has the momentum as a de facto industry standard.

In contrast to the weak K8s announcement, AWS has gone overboard with machine learning news, enhancing its SageMaker ML service – no doubt conscious that this is an area where both Google and Microsoft have made good headway. SageMaker Studio is a new web-based IDE for ML workflows, including Jupyter notebooks, model debugging, and general availability of Model Monitor for checking predictions. 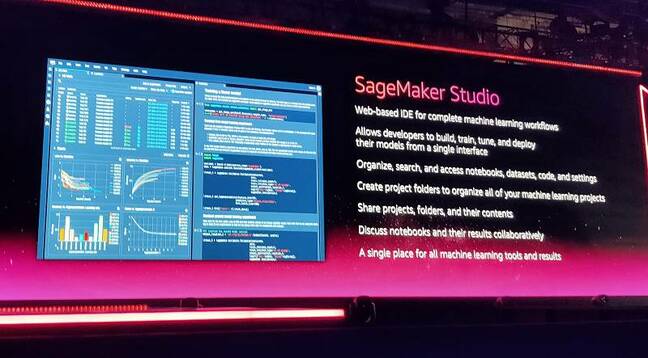 General availability of Redshift RA3 nodes, which lets you pay separately for compute and storage, was also announced. Redshift is the AWS data warehouse service. The neat feature here is that the service will automatically move rarely-accessed data to the cheaper S3 service while keeping hot data on SSDs.

Another Redshift announcement was AQUA (Advanced Query Accelerator) which uses an RA3 cluster for a claimed 10x performance increase. AQUA will be available mid-2020.

A serverless Apache Cassandra service was also referenced. DataStax, which sponsors Cassandra, made the best of AWS entering its market. DataStax CTO and co-founder Jonathan Ellis issued a statement saying that “We welcome Amazon’s news as another vehicle that accelerates Cassandra adoption.”

Another database announcement relates to AWS Elasticsearch, its offering of the open source database often used for log analytics. The problem with log data is its size, causing customers to throw away old logs too quickly, claimed Jassy. He announced Ultrawarm, which will move cold data to cheaper S3 storage, but retrieve it rapidly when needed, making storage of large amounts of log data more cost-effective.

Jassy also announced Kendra, an enterprise search service. Set up is a matter of pointing the service at one or more data sources, including SharePoint, Exchange, OneDrive, Box, Dropbox, Google Drive, Salesforce and Confluence.

Kendra will index the data, and use ML magic (all going well) to answer natural language queries intelligently. User ratings of the answers will gradually improve the service, Jassy said.

Developers will be intrigued by CodeGuru, another new service, which uses ML based on both Amazon’s code and 10,000 “top open source projects” in order to automate code reviews. You will be able to add CodeGuru to a pull request on GitHub or AWS CodeCommit, and CodeGuru will automatically comment, identifying issues, making recommendations, and linking to relevant documentation.

CodeGuru also includes an agent-based profiler which promises to identify the most expensive lines of code, in terms of performance. The re:Invent crowd liked the sound of CodeGuru, giving it a cheer, though whether it translates to anything useful will await until it's used in anger.

There’s more. Wonderful though the cloud is, Jassy acknowledged that on-premises and local services also have value, announcing the general availability of Outposts, which lets you run selected AWS-managed services on-premises. He also announced Local Zone, currently only available in LA but planned for other cities too, which brings selected services “very close to a particular geographic area,” with the idea being to reduce latency.

Jassy also detailed AWS Wavelength, designed for services to 5G users, which promises to offer low-latency connections to support things like games, live video, and augmented reality. It is described as an edge service but the edge aspect appears to be virtual, based on “minimizing the network hops and latency.”

It was a lot to cover, and we have not even mentioned the fraud detection service, the Contact Lens sentiment analysis for Amazon Connect contact centres, or the general availability of S3 VPC access points. Well, we have now. But as attendees staggered away from Jassy’s marathon three-hour keynote, what is the big takeaway?

Overall, the ML announcements were notable. So too is the work on storage, with a number of services gaining smarts about hot and cold data, and moving this between cheaper or faster storage as needed. The K8s strategy looks unclear.

There are a few moves towards SaaS services, Kendra for example, but not much and nothing that will trouble Microsoft or other big SaaS providers. The AWS juggernaut though is rolling on. ®