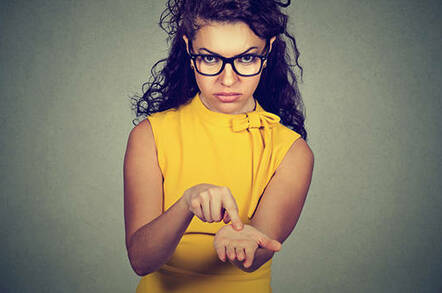 Updated Angry AT&T customers have asked a judge to force America's trade watchdog, the FTC, to hand over the information it used to reach a $60m settlement with the cellular network for throttling “unlimited data” plans.

Last month, the FTC finally reached an agreement with AT&T following a five-year legal battle in which the telco goliath argued - successfully at one point - that the government regulator had no authority over it. The $60m figure the FTC decided on was a little lower than the $100m fine its sister regulator the FCC had levied against AT&T for screwing over people with "unlimited" data plans.

While that whole saga with the FTC was rumbling on, a group of AT&T customers were suing the network operator over the same beef: they are fuming after discovering their “unlimited” data plans were actually rather limited, in that their connections were throttled after downloading more than 2GB in any given month.

That consumer lawsuit, filed in a US district court in California, was put on hold twice, first on legal grounds and then to see what happened with the FTC case. Now, this month it is back up and running, and the customers want to know what information the FTC managed to drag out of AT&T in its lawsuit.

AT&T for its part thinks that the FTC settlement should be the end of the matter, and has applied for the “confidential” information it gave to the FTC to remain sealed. It has also told the judge in the consumer case that its angry customers are now happy following the FTC agreement and there’s no need for the case to continue.

Those customers vehemently disagree and have accused AT&T of taking their words out of context by using “partial, out-of-order, and out-of-context quotations.”

So what data are we talking about? “The information in question, which is currently redacted in the public version, includes: the numbers of eligible customers eligible for the $12 or $31 payments under the FTC Agreement; and information related to how the FTC calculated its assertion that the $60 million amount of the FTC Agreement represents between 32 per cent and 47 per cent of the FTC’s potential recovery for the FTC’s claim,” a filing [PDF] from the consumers states.

It notes that AT&T claims that the information is confidential but also points out that the court in the FTC case has ordered the federal regulator to explain its $60m settlement.

“The affected and aggrieved consumers have the right to know the underlying basis for the FTC Agreement, as the Court’s order implicitly recognizes, including how many customers would be eligible for payments and in what amounts, and for the FTC’s public claim of the supposed percentage of potential FTC recovery the FTC Agreement monetary figure represents,” the filing argues.

It’s even more important to get the information “given that AT&T has now revealed its intent to exploit the FTC agreement as grounds to preclude, de facto, any recovery to the putative class,” it complains. In other words, AT&T says the FTC decision should be the end of the issue once and for all.

The consumers are notably frustrated with the FTC for not coming to its aid. The regulator is trying to stay neutral, telling the court that it has “not taken a position on the issue,” but the customers are not having any of it: “Respectfully, the FTC should be insisting to AT&T (perhaps it will) that the information be filed publicly under the circumstances.”

Although the FTC did settle with AT&T, one of its commissioners was outspoken about how angry he was with the agreement. In an official statement at the time, Rohit Chopra called AT&T’s actions a “scam,” “scandal,” and “massive fraud,” and noted he “would have liked to see AT&T pay more,” stating that “the bottom line is that AT&T fleeced its customers to enrich its executives and its investors.”

The AT&T customers are hoping to make that argument come true and force the giant telco - which banked $20bn in profit last year - to pay out more than $60m for selling one thing and then providing another. ®

AT&T has been in touch to defend the bandwidth throttling: "Even though it has been years since we applied this network management tool in the way described by the FTC, we believe this settlement is in the best interests of consumers."