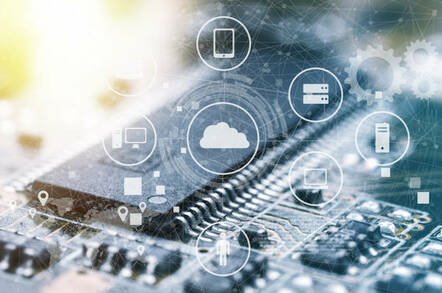 Imagination will today launch the tenth generation of its PowerVR family, with GPU cores aimed at rendering 3D graphics and other imagery for all sorts of stuff, from phones and cars to PCs and servers.

There are a number of things to note with this particular roll out, which essentially marks Imagination's comeback bid after a not-so-great end to the decade. The UK-based biz dramatically lost its flagship customer Apple, which decided it wanted to do its own graphics processing cores for future iPhones rather than continue to use PowerVR; it also sold off its MIPS microprocessor wing; and it had to be rescued by Chinese private equity.

Feeling a little lost in the weeds of the semiconductor industry – what with Arm, Qualcomm, Nvidia, Apple, AMD, and others, taking all the limelight with their graphics, compute, and AI acceleration developments – Imagination hopes it can return to form and regain any lost ground with this new generation. Bear in mind, at one point, PowerVR was considered a gold standard in embedded and mobile GPU cores, though the family has somewhat lost its momentum as it commercially stumbled, and Arm, Apple, and others caught up.

So, what are the big changes? With its tenth generation, Imagination has switched to a new naming scheme for its GPU cores. Previous generations were dubbed PowerVR 8, 9, and so on, whereas now it's the PowerVR A-series, B-series, C-series, and D-series. It feels very hexadecimal, counting from 6, 7, 8, 9 to A, B, C, D.

Another change is that the GPU cores are directed by a built-in 32-bit RISC-V-compatible firmware processor. This highly customized internal CPU core has full control over just about every aspect of the graphics pipeline, including voltage and frequency scaling, allowing drawing operations and calculations to be optimally scheduled and rescheduled as needed, and individual engines powered up and down as necessary for power and utilization efficiency.

This controller, hidden away inside the architecture, runs its own Imagination-supplied firmware, and is not something developers need to worry about directly. It's just rather interesting to know that there's a RISC-V CPU core driving and regulating these GPU beasts, with control signals probing into the pipeline – especially since Imagination offloaded its MIPS CPU division.

MIPS and RISC-V have a shared heritage: your humble hack thinks of them as aunt and niece, respectively. As a side note, Imagination recently made its GPU designs available to chip engineers via RISC-V system-on-chip darling SiFive.

This janitor core works in tandem with Imagination's tile-based rendering approach, which tries to only draw stuff that's actually visible on-screen to save power and bandwidth.

Then there's the usual claims of performance boosts over previous generations. Imagination reckons the A-series has 2.5 times the graphics performance, eight times the machine-learning performance, and 60 per cent lower power consumption than PowerVR cores shipping today, on the same fabrication process node and same clock frequency.

The A-series, codenamed Albiorix, is available to license now. The B-series, codenamed Barrex, is due to land around Q3 next year with a roughly 30 per cent performance boost over the A-series, then the C-series, dubbed Caturix, in Q3 2021, and D-series, aka Divano, in Q3 2022. Safety critical versions of these next-generation GPUs are due to arrive next year, starting with the B-series. The B-series is set to include at least a 3 TFLOPS top-end GPU design.

Essentially, it's A for the series; X for... cool, we guess, then T for top end, or M for mid-range, or E for entry level followed by two numbers: the number of gigapixels per second, and the number of GFLOPS of performance. The AXE 2-16 is capable of rendering two pixels per clock tick; the AXE 1-16 can do one pixel per tick. This is, again, all according to Imagination.

Meanwhile, we're told the A-series "is already licensed for multiple markets and the first SoC devices are expected in 2020."

To us it seems the A-series is laying the groundwork for this new PowerVR generation, and is available now for manufacturers who need it, whereas the B-series is perhaps the main event. The high-end XT cores are aimed at expensive phones, always-connected PCs, and driver-assistance tech in cars; the XM at swanky TVs and mid-range mobes; and the XE family at the Internet of Things, industrial systems, cheap phones, and similar embedded electronics.

All the GPUs include virtualization support in hardware, we're told, allowing multiple operating systems and real-time code to share a graphics processor, with particular workloads prioritized over others. To achieve this, the A-series uses Imagination's so-called HyperLane technology, with each GPU in the family featuring up to eight of these lanes, which are each kept separate and isolated in the system memory map.

These are hardware queues into which graphics requests and AI operations are fed; it is possible to configure the graphics processor to guarantee particular performance levels for specific lanes. This means things like protected movie content can be streamed via its own lane without other software snooping on it, and graphics for main displays can get priority over AI operations or other non-essential rendering. Or so Imagination says.

This latest PowerVR generation supports OpenGL ES, Vulkan, and OpenCL, and uses the same API for AI acceleration as Imagination's other neural-network engines.

All in all, this means there's a little bit more competition in the mobile and embedded GPU market, which means, hopefully, better chips and better performance for device owners – either because this latest PowerVR tech makes it into forthcoming gear, or because it spurs rivals into putting out improved designs. All competition is welcome, in our eyes.

By the time you read this, more info should be on the Imagination website.

Interestingly enough, the A-series was announced at 0900 Beijing-time today, and 0100 in its home country of the UK, just in case you were wondering which side Imagination's bread is buttered, and whether had been put off dealing with China amid the ongoing trade war between America and the Middle Kingdom. Clue: it hasn't. ®

MWC 2014 Headed to the next-generation iPhone and iPad?