Nudity, inebriation and a desire to see a band live on stage. The Christmas countdown has begun! 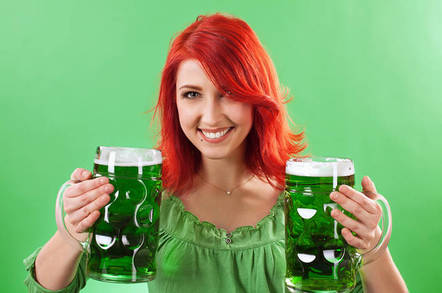 Who, Me? Crack open the advent calendar, chow down on some stale chocolate and join us in celebrating the prospering of cheats with a Who, Me? featuring a reader very much on the naughty list.

Readers may recall Theo's On Call antics a couple of weeks ago. It appears that worrying scanner operators may be the least of his sins as today's tale reveals.

A certain green-tinged festival was occurring in Theo's home state and for those not blind drunk through over-consumption of hefty stout or strong spirits, or unable to extract themselves from a comedy hat, the local radio station was running a competition.

The prize was tickets to one of the biggest bands of the time (a band originating from the, er, very green isle celebrated by the festival).

"The promotion," recalled Theo, "required entrants to turn their vehicle into a shrine for the band, then listeners would vote for their favourite shrine on the radio station's new website."

It was all a thinly disguised marketing ploy to drive traffic to the site, which was festooned with all the multimedia geegaws afforded by the late '90s. Imagine a sprinkling of BLINK, MARQUEE and the best of GeoCities and you're getting there.

While not overly bothered about the band, Theo had heard that a childhood friend had entered.

"In fact, he already possessed such a shrine – a beat-up old van, coated in Kelly green house paint, the inside lined with all manner of band memorabilia."

Theo checked the website and, by day 10 of 14, was pleased to note that his old friend enjoyed a commanding lead.

But not for long.

"A late entrant, however, seemed to be causing a change in the balance – a picture of a young lady, standing next to her green vehicle, wearing naught but green paint."

"Her vote count," said Theo, in what we hope was his best Kenneth Williams voice, "rose rapidly."

As his friend steadily lost ground, Theo smelled a rat. The competitor's votes "had been rising steadily, at a smooth pace that did not account for the sorts of spikes and valleys you would expect from lunchtime, sleepy time, etc."

A cheat! "I was incensed!" thundered Theo. But what to do? Shop the lady in the green paint? The competition was nearly over.

"Two can play at this game," thought Theo, and he got to work.

After a bit of poking around, Theo discovered that the website used cookies to stop multiple votes. There was no logging in or email, just a simple vote button. Delete the cookie, refresh the page and the vote button would be re-enabled and another vote could be cast.

"I dutifully scrutinized the rules; there was nothing in there about singular votes, automated entries, or anything else that would exclude the thought that came to my mind."

So, in support of his friend (clearly the about-to-be-injured party if Theo didn't step in), our hero put together a batch file that looked a bit like this:

He then opened a series of web browsers, and recorded a script of clicking the submit button to vote for his friend's green van, then clicking back. He naturally added a delay of half a second to handle erratic load times and finally fired off RoboVoter on "my fattest server (Pentium 90) with my fattest pipe (1.5Mbit baby)".

Oh, and there was a timer to stop the script when the competition was scheduled to end.

Theo checked in that evening to see how things were going, and was pleased to note that his friend was back in his rightful place: in the lead.

"But by a vote count that likely exceeded the entire listenership of the radio station."

RoboVoter was on track to multiply the figure by 10-20x more. And Theo? He just went to bed – his almost-certain-to-be-disqualified friend would have lost anyway.

When Theo checked again the following morning, it appeared the green lady had upped the pace of her own voting system, and while her vote count was impressive "my script had outpaced hers significantly".

In fact, the total votes cast had not only exceeded the population of the city, that of the state had also almost been surpassed.

"I was smug in my technical victory, then promptly forgot about it," recalled Theo. Probably too busy sticking Batman references into scanner code.

It would be another six months before Theo ran into his old friend again and found out what had happened next.

The green van owner told him: "Apparently I won the contest, but one of the other contestants sued the radio station because they had lost because I had cheated – I must have paid people to vote for me.

"Due to the lawsuit, they could not give me the tickets, so I missed the concert. During the lawsuit, the other contestant revealed that she had paid someone to win the contest for her, and was suing the station both for the tickets and to recover costs for her cheating.

"She lost, and the station ended up sending me to see the band multiple nights in another city, hotel and travel included.

Theo, who never saw his friend again, concluded: "He still does not."

Ever used your IT powers for evil and rigged a voting system? Or think you know someone who has? Put your confession on the side of a bus, or maybe just email it to the sympathetic vultures of Who, Me?